DAVID AND GOLIATH OF DUBROVNIK

Ivan Negodic testified about what artillery the defenders of Dubrovnik had and where it was located Dubrovnik citizens, contradicting the testimony of previous witnesses that there had been no mortar positions or armed people anywhere near the Old Town. 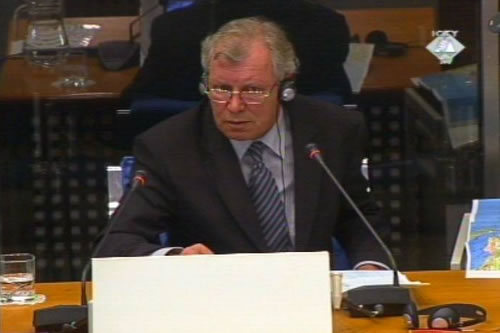 Ivan Negodic, witness at the Pavle Strugar trial
In the fall of 1991, Ivan Negodic was the Dubrovnik defense forces’ chief of artillery. As early as June, he was involved in "administrative preparations" for the defense of Dubrovnik, which were set in motion after “the events in Vukovar in the summer of 1991.”

At the trial of Pavle Strugar, commander of the 2nd Operations Group and commanding officer of the JNA’s Dubrovnik operation, Negodic testified about what artillery the defenders of Dubrovnik had and where it was located between October and December 1991.

As Negodic testified, artillery was deployed in several locations around Dubrovnik: Gospino polje, Lazareti, Mala Petka, and Lapad. The weapons were Sagger missiles, recoilless guns, mortars, rocket launchers and ZIS cannon. The witness confirmed that in the second half of December 1991, one mortar was located in Bogesica Park, a location near the walls of the Old Town. In its cross-examination, General Strugar's defense was particularly interested in that location.

By calling Negodic, one could say that the prosecution risked impeaching some of its own witnesses – mostly Dubrovnik citizens – who stubbornly denied there had been mortar positions or armed people anywhere near the Old Town or an organized defense of Dubrovnik.

Ivan Negodic pointed on a map to the artillery positions the defenders of Dubrovnik had, specifying when each position was active and to what extent – in other words, when each was used to open fire on JNA positions.

According to Negodic's testimony, the artillery sector had no professional soldiers and the level of training of his personnel was "mediocre." The units were mostly composed of reservists – people who had done their national service in the JNA – and the best-trained among them operated the weapons. Negodic said there were no National Guard Corps members in the artillery.

The witness states that the weapons arrived from the direction of Metkovic/Ploce, from the Peljesac peninsula, from the islands of Mljet, Sipan, Lopud, and Kolocep. The ammunition was transported to the islands from the same direction. The islands "were toured by speedboats, which gathered the ammunition and unloaded it in Lapad, on the main beach." Describing the small incidents that would occur in these "weapons supply" operations, Negodic said, "This was a David against Goliath situation." When asked to explain who was David and who was Goliath, Negodic said that David was "the Croat in a speedboat, only he did not have a sling."