BURST OF GUNFIRE IN THE BACKS OF CROAT PRISONERS

In the village of Dusina, on 26 January 1993, BH Army troops shot to death six local HVO members and a civilian, as a prisoner who survived the murder by chance testified. 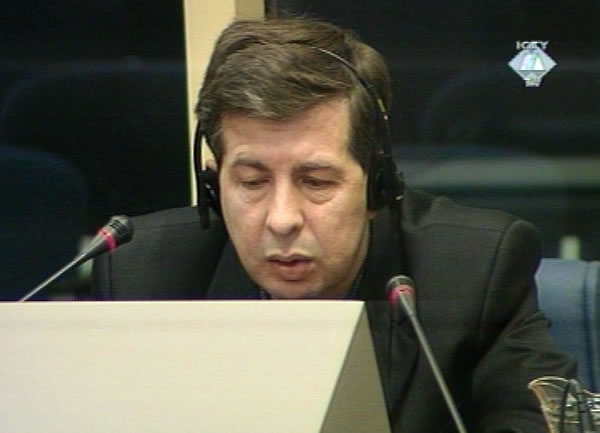 Ivica Kegelj, witness at the Hadzihasanovic and Kubura trial
At the trials of the political and military leaders of Croats in Central Bosnia, the defense counsels for the accused Blaskic, Kordic and Cerkez claimed that the "first blood" in the Croat-Muslim conflict in 1993 was shed in the village of Dusina, about twenty kilometers away from Zenica. This time, at the trial of Enver Hadzihasanovic and Amir Kubura, commanders respectively of the 3rd Corps and the 7th Muslim Brigade of the BH Army, the evidence of the massacre in Dusina was adduced by the prosecution.

An eye-witness of the crime, Ivica Kegelj testified about how BH Army troops, after they entered Dusina on 26 January 1993, shot to death six local HVO members and a Serb civilian. The witness escaped the same fate by chance, because he was all covered by blood and unconscious from the beating he had sustained.

After BH Army troops entered the village, they troops first used Croat civilians and local HVO members as a "human shield" and then detained them in a house where they maltreated them interrogating them about their weapons. After several hours, BH Army troops called out the witness and seven other detained men and took them toward the witness's house. En route they singled out a prisoner and shot him to death, saying that this was done "as an example for the others, so that they could see what would happen to them if they did not cooperate". When they reached the house, they were ordered to line up and then one by one, the detainees were called out and asked questions about the weapons, while they were beaten. When the questioning of a prisoner would be over, they would be ordered to run toward a nearby garage and a burst would be fired in their backs.

Ivica Kegelj testified that a man who said his name was "Geler" led this group of BH Army soldiers. He had lost an eye when he fought in Croatia. When his turn came, "Geler" punched the witness in the face and about the body so that he was all covered in blood. He fell down unconscious. This probably saved his life, because they could not order him to run towards the garage. Kegelj testified that the prisoners who were shot were members of the local HVO reserve and that all of them, except him, were older than fifty.

When Franjo Kristo's turn came, he cried out that he was "just a civilian". "Geler" then said, "That's enough, we won’t do this any more.". The prisoners who survived were ordered to put the bodies in the garage and "Geler" threatened them that if they told anyone about what had happened he would personally deal with them.

Sometime after midnight, Ivica Kegelj was taken to the KP Dom (penitentiary facility) in Zenica, together with other 26 captured HVO soldiers. They were escorted by the special police who had come to get them from Zenica. En route, the prisoners were beaten badly and the police officers, the witness recalls, ordered the driver to "drive more slowly" so that the abuse could last longer.

Apart from the victims of the crime witnessed by Ivica Kegelj, local HVO commander Zvonko Rajic was killed on the same day in a separate incident, it is alleged in the indictment which charges Enver Hadzihasanovic, as the commander of all the units that took part in the Dusina operation, with these murders.