GENIE FROM THE LAMP

A BH Army commander said the mujahedin, who fought in Central Bosnia, were like the "genie in the tale of Alladin – they refused to go back to the lamp!" - At the trial of Enver Hadzihasanovic and Amir Kubura, a British officer stated that the mujahedin, despite their lack of discipline, operated as part of the 3rd Corps of the BH Army. 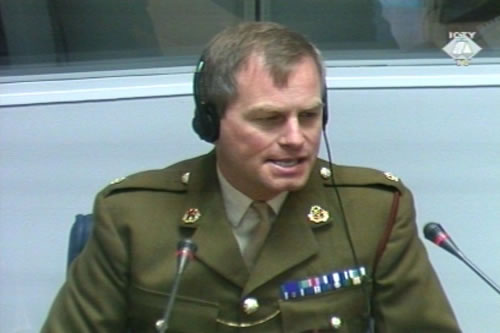 Vaughn Kent Payn, witness at the Hadzihasanovic and Kubura trial
Foreign fighters, the so-called mujahedin, were used to spearhead the attacks launched by the 3rd Corps of the BH Army and formed part of the 7th Muslim Brigade, according to the testimony of British Major Vaughn Kent Payne who commanded a company of the UNPROFOR British Battalion in the Lasva valley in 1993.

The mujahedin "were perhaps undisciplined and out of control, but they still acted as part of the 3rd Corps", said Kent-Payne at the trial of Enver Hadzihasanovic, the then commander of the 3rd Corps and Amir Kubura, commander of the 7th Muslim Brigade. They are charged with crimes against Croat and Serb civilians. Some of the most serious crimes were committed by the mujahedin.

The defence counsels for Hadzihasanovic and Kubura protested to this testimony, saying that the witness presented his "assumptions" and not "hard facts". The prosecutor however considers that this is an assessment which is completely acceptable because it is based on what the witness "saw and heard" during his tour of duty in Bosnia. After a brief consultation, the judges allowed the testimony to become part of the record, provided that the witness specify the sources for the information that the mujahedin spearheaded the attacks launched by the 3rd Corps.

"The evidence I gave came from the briefings given by our military information cells," replied the witness and went on to explain that the intelligence officers and other UNPROFOR members, actively enquired among the local population about who the foreign fighters were and what they were doing. He believes that the mujahedin were given the leading role in the attacks because they were "better trained and more aggressive" and because their fanaticism could make the HVO soldiers run away.

Kent-Payne described several encounters with the foreigners in the course of his patrol duties in the villages of the Lasva valley. The foreigners would "aggressively" order the local BH Army soldiers what to do and would decide whether to let UNPROFOR patrols through the villages or not, the witness stated. In May 1993, at a check-point near Fazlici a foreigner, an Arab based on his looks, told the witness in English that UN members were "foreigners" in Bosnia and that "Muslims would take care of Muslims." More than a hundred local men and more than thirty foreigners gathered at the check-point. One of the foreigners shouted "Death to the infidels!" in a Yorkshire accent. "It was very incongruous to hear in Bosnia," commented the witness who comes from Yorkshire himself.

He said that in June 1993 the BH Army cooperation with the UN decreased. He added that in early June, at a meeting arranged by UNPROFOR, the BH Army undertook not to attack the HVO but launched an attack a few days later nevertheless.

The witness first met the then commander of the 3rd Corps Hadzihasanovic around that time. In June 1993, when he wanted to visit the village of Grahovcici because he had heard there had been casualties there, BH Army soldiers refused to let him through the check-points without a written permit issued by the Corps commander. Witness had to go to Zenica twice that day to take care of the paperwork. The witness believes that he was hindered on purpose – at the check-points and in Hadzihasanovic's headquarters – in order to reach Grahovicici as late as possible. In the evening, when he arrived in the village, he noted evidence of fighting and blood, but there were no dead bodies and no civilians.

In June, the British officer took part in the evacuation of 181 Croats from the village of Guca Gora and witnessed the damage and desecration done to the Catholic monastery in that village. Several weeks later he met Hadzihasanovic's deputy, Dzemo Merdan and complained about the desecration in Guca Gora. Merdan replied that it had been done by the mujahedin. When Kent-Payne said that "they were under the control of the 3rd Corps”, Merdan replied: "You have to understand that the foreigners are a bit like the genie from Alladin's magic lamp. You can rub the lamp and get the genie to help you, but once the genie is out of the lamp, it is very hard to put him back in and he is very hard to control. That's the way they are. "