A WORKDAY IN THE LIFE OF DETAINEES IN BUGOJNO

Former prisoner of the BH Army in Bugojno describes a "working day" in which, in between stints of carrying corpses and digging graves, he was regularly beaten. 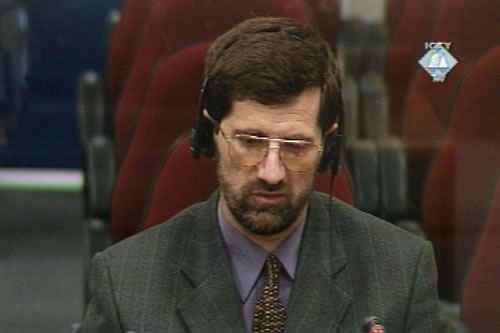 Tomislav Mikulic, witness at the Hadzihasanovic and Kubura trial
Captured HVO soldiers and Croat civilians in Bugojno were taken to do forced labour during which BH Army soldiers verbally abused and beat them, it is the prosecution case at the trial of Enver Hadzihasanovic and Amir Kubura, accused of the crimes committed by the BH Army in Central Bosnia.

Witness Tomislav Mikulic, former member of the Bugojno HVO was detained, after he surrendered to the BH Army forces in July 1993, with hundreds of other local Croats. He described one "working day" in early August 1993, when he was taken to dig graves for the Bosniaks who had been killed by HVO in the village of Vrbanja. One of the BH Army military police officers beat them with a baton as they walked towards the village. "We had to load dead bodies onto the truck. Because it was very hot, they had already begun to decompose and there were maggots crawling out of the bodies.” As they were loading them, another person beat them with a baton. The beating continued as they waited for the truck that had taken the bodies away to return. He made them lie on the road on broken glass and beat them again himself. “He beat us on the head, backs, kidneys, and then forced us to beat each other."
The civilians who had gathered around also threw "a rock or two" at the prisoners. Mikulic says he was aware of the fact that "the people [Bosniaks in Vrbanja] perished" and that it was "hard at such a time" to expect any help, but he wondered nevertheless why no one tried to calm down the man who maltreated them.

Later that day, as they were digging graves in Crnice, the prisoners were abused by another BH soldier. He threw rocks at them and cursed them as Ustashas. Mikulic's head split open when a rock hit him. "At one point, just before I fell, I saw him taking a shovel to finish me off, but Zdravko [another detainee] threw himself over me."

Mikulic says he still suffers physical and psychological consequences of the beatings and bad conditions in detention. During the first three months of detention he lost more than 25 kilos. He went through a number of make-shift detention centres in Bugojno – two elementary schools, a high school, a furniture store and the Iskra Football Club stadium. He was released in March 1994.

Cruel treatment of detainees is one of the charges against the then commander of the BH Army 3rd Corps, Enver Hadzihasanovic. Although his headquarters was in Zenica, the prosecution deems that it was his duty to know about, and prevent or punish the unlawful treatment of civilians and prisoners of war.