On the first day of the defense case at the trial of the former Herceg Bosna leaders today, the first accused Jadranko Prlic delivered his statement. He denied all the accusations, saying he sympathized with all the war victims. He himself was a war victim, he said 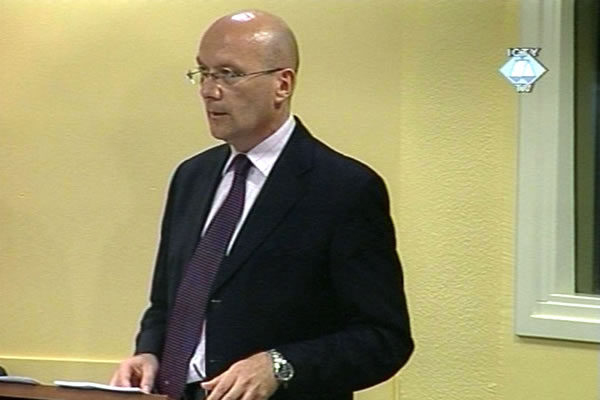 Jadranko Prlic in the courtroom
‘I sympathize with all the war victims. In a way I was a war victim myself’, former Herceg Bosna prime minister Jadranko Prlic said on the first day of the defense case in his statement. Prlic did not make the solemn declaration before delivering his statement and the Trial Chamber will consider its evidentiary value subsequently. In the statement, Prlic contested the allegations in the indictment about the joint criminal enterprise and the crimes against the Muslim population in Central Bosnia and Western Herzegovina during the Croat-Muslim conflict in 1993.

Denying his responsibility on all counts in the indictment, Prlic first recounted his political career from ‘a pioneer and Boy Scout’ to the prime minister of Herceg Bosna government. He went on to describe in detail the position of BH in the former Yugoslav federation, the first multiparty elections, the ‘winds of war’ in Slovenia and Croatia and eventually the ‘chaos’ that followed in BH. He gave his view of the context in which the Croatian Community of Herceg Bosna was created, the way it functioned and the conflict with the BH Army.

Speaking about the relations between Herceg Bosna and Croatia, Prlic stressed he ‘always advocated an independent BH’ substantiating his claim with a quote from his interview to the Sarajevo TV in early 1992. ‘Then I clearly stated that in order to survive, BH should be equally close to and equally distant from both Croatia and Serbia’, Prlic noted.

As the judges noted, Prlic’s statement has limited evidentiary value because he did not make a solemn declaration and because he will not be cross-examined by the prosecution. Prlic will conclude his statement tomorrow and the defense will call its first witness, former Croatian foreign minister Miomir Zuzul.