‘CELEBRATION AND TEARS’ IN REFUGEE CAMPS 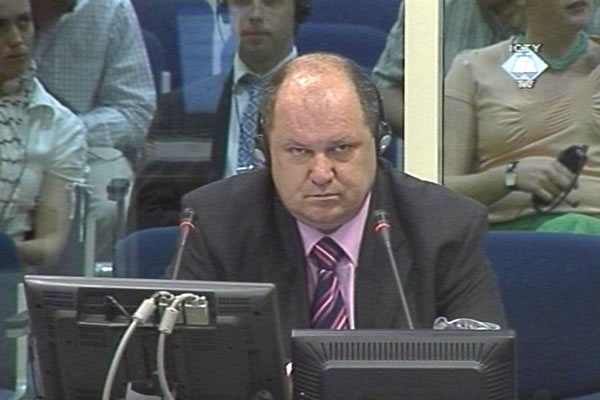 Damir Zoric, defence witness of Jadranko Prlic
Damir Zoric, former deputy chief of the Croatian Government Office for Displaced Persons and Refugees, continued his evidence today as Jadranko Prlic’s defense witness. According to the Office, in February 1993, there were more than 650,000 refugees in Croatia. This figure included both Croats and Bosniaks from BH. Zoric claims that they were all treated equally, according to the protocols agreed between Croatia and BH.

Prlic’s lawyer Michael Karnavas showed the witness the protocol on logistics on refugee centers from February 1993. Presiding judge Jean-Claude Antonetti asked for more details on how this protocol worked and if it worked at all ‘in the periods when the BH Army launched its offensives such as the one in the Lasva valley’. This agreement remained in force until the end of the war in BH in 1995, Zoric replied, including the periods of fierce Croatian-Muslim fighting the judge mentioned. Zoric described this as ‘part of the paradox and the bitter aspect of the work’ he did.

Sometimes, Zoric said, soldiers would come back from Bosnian fronts ‘to spend their free time with their families in refugee centers’. When the people in the centers listened to or watched the news reports about the events in BH, ‘one side would celebrate, the other cry’ hearing the same news. The witness agreed with Prlic’s defense counsel that ‘the Muslim soldiers who had been killing Croats during the week and who spent pleasant weekends with their families in Makarska, for example, with their refugee families’ caused incidents. Zoric did add that these ‘soldiers on weekends off’ could have been both BH Army members and the HVO soldiers.

The accused Slobodan Praljak asked for permission to provide additional explanations about the role of Muslim fighters in refugee camps. As he noted, it was his intention to put a stop to ‘beating about the bush’ on this issue. He wanted to ask the witness directly if he knew that ‘BH Army victories in Central Bosnia’ were celebrated in refugee camps and if he was aware of the impact of those celebrations on Bosnian Croats situated in the same centers. The judges did not allow his to question the witness, reminding him of their decision, confirmed by the Appeals Chamber, granting him permission to cross-examine witnesses in exceptional situations specified in the decision; this was not the case now.

As his evidence continues, Damir Zoric will be cross-examined by prosecutor Kenneth Scott.