MUSLIMS HAD TO BE EXPELLED TO HAVE CROAT MAJORITY

Last week, the defense of the accused former Herceg Bosna leaders argued that the prosecution had failed to prove their responsibility for the crimes they are charged with. In his reply to the defense, the prosecutor quoted at length from President Tudjman’s transcripts. The quotes showed that the operation aimed at establishing a Greater Croatia whose borders would correspond to those of the former Banovina ‘was run both from Zagreb and from Mostar’, the prosecutor contended 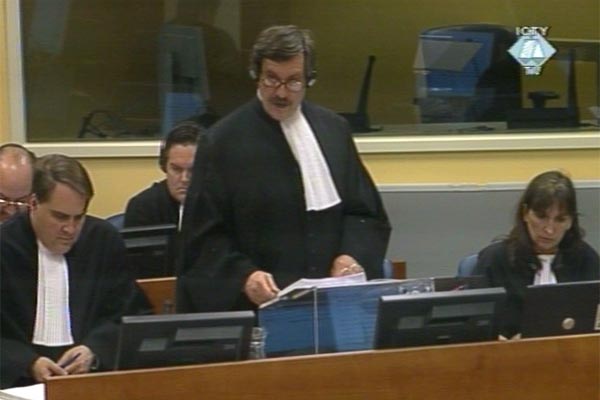 Kenneth Scott, prosecutor in the case of the former Herzeg Bosnia leaders
The prosecution believes that in the course of its case it has been sufficiently proven that the six former Bosnian Croat leaders are responsible on all counts in the indictment – including the charges for joint criminal enterprise aimed at ethnically cleansing parts of BH that were to be annexed to Croatia. The six are on trial for crimes committed in the course of the Croatian-Muslim conflict in Central Bosnia and Herzegovina in 1993 and 1994.

Prosecutor Kenneth Scott stated today that ‘both Zagreb and Mostar’ ran the well-planned operation to establish a Greater Croatia whose borders were to correspond to those of the Banovina, in existence in 1939. According to him, the key players that made all the decisions were the Croatian president Franjo Tudjman and defence minister Gojko Susak, together with the president of the HZ HB Mate Boban and its prime minister Jadranko Prlic.

The prosecutor substantiated his argument with a series of quotes from the presidential transcripts, recording the meetings between Croatian and Herceg Bosna leaders. In a conversation from September 1993, Praljak told Tudjman and Susak about the problem of an increasing number of Muslim refugees. ‘It’s better we take care of them now, it will be difficult to expel them later…If we don’t expel them, we won’t have a Croat majority,’ Praljak said. Soon after this meeting, the HVO attacked Prozor.

In the prosecutor’s view, the Vance-Owen peace plan accommodated Tudjman’s aspirations to ‘have the Croatian nation within the broadest possible borders’. Croats rushed to sign this plan, because the borders of Croatian provinces it envisaged corresponded with the Banovina borders. Croats believed the international community would support their actions. They launched into the implementation of the plan despite the fact that the other two sides – Bosnian Muslims and Serbs – had not signed it.

The Vance-Owen plan was implemented prematurely, the prosecutor explained, because the Bosnian Croats wrongly concluded that the plan called for the resubordination of the BH Army to the HVO in the three Herzegovina districts envisaged by the plan. A few days after the plan was accepted, in mid January 1993, Prlic gave the BH Army five days to either leave the Croatian territory or to be resubordinated to the HVO. The BH Army interpreted the Vance-Owen plan differently, and the ultimatum resulted in a violent attempt by the HVO to take over power. The conflict broke out first in Gornji Vakuf and Travnik and then spread to other parts of central Bosnia Herzegovina.