As the defense case continues at the trial for crimes in Srebrenica and Zepa, former commander of the military police in the VRS Main Staff contends that some of the Bosniaks who had retreated towards Tuzla after the fall of Srebrenica committed suicide while others were victims of ‘out-of-control’ paramilitary groups 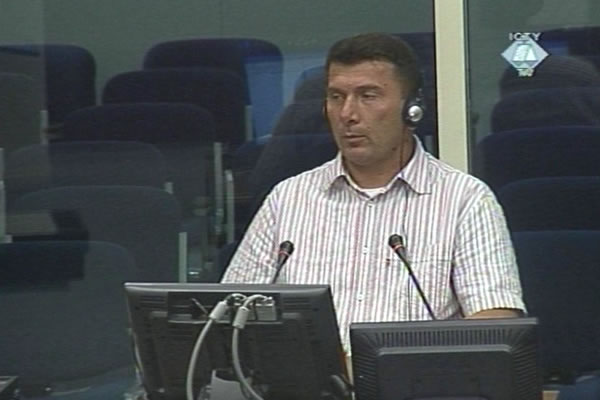 Marinko Jevdjevic, defence witness of Ljubisa Beara and Radivoj Miletic
As the defense case of the Bosnian Serb military and police officers for crimes in Srebrenica and Zepa continues, the defense counsel of Ljubisa Beara and Radivoje Miletic called their joint witness Marinko Jevdjevic, former commander of the military police unit in the VRS Main Staff.

After the fall of Srebrenica, Jevdjevic searched the terrain in the area where Bosniaks from Srebrenica were trying to break through towards Tuzla. In the hills above Nova Kasaba on 15 July 1995 he stumbled upon a number of ‘bodies of enemy soldiers from Srebrenica’. In his words, they ‘committed a group suicide along the road’ by activating hand grenades. He reached this conclusion ‘based on the wounds’ he saw on the bodies of those men in BH Army uniforms. There were ‘military belts, ammunition and guns’ lying beside them. He heard from his superior commander that a similar ‘group of mass suicides had been found in a nearby village, Jela. The search operation took three days. Jevdjevic claims he didn’t saw Ljubisa Beara, chief of security of the VRS General Staff in that period.

Answering the questions of the defense of Radivoje Miletic, former deputy chief of the VRS General Staff, Jevdjevic recounted that on 16 July 1995 he was given an order: ‘he and his parcel’ were to leave for the Zepa district. ‘Parcel’, he explained, was the usual term for a military unit among the troops. The defense is trying to challenge the prosecution allegations that the VRS officers used the term ‘parcels’ in the intercepted conversations as a code for captured Bosniaks that were later executed.

The witness also spoke about the ‘continuous but unsuccessful’ efforts of the VRS and the military security service to put ‘troublesome’ paramilitary formations operating all over the Bosnian theatre ‘under control’. Those groups were still operating in late 1995. The defense thus implies that rogue paramilitary units could be responsible for the killing of Bosniaks in Srebrenica in 1995.

Ljubisa Beara’s defense called an expert witness today. Canadian forensic anthropologist Debra Komar participated in the exhumations of victims in the Srebrenica area. Dr Komar challenged the validity of the report drafted by the OTP forensic team pointing to 'methodological deficiencies’ in the manner in which the number of exhumed victims was established in that report. The defense contests the allegations of the prosecution about the number of victims of Srebrenica crimes. Through this witness, the defense wants to corroborate the argument that victims of armed conflicts were buried in mass graves, not, as the prosecution alleges, victims of executions.