Mile Akmadzic, prime minister in the BH wartime government, continues his evidence at the trial of former Bosnian Croat leaders. In his words, Alija Izetbegovic acted as head of state and not as the first among the equals. In December 1992, Izetbegovic for all intents and purposes usurped power, setting aside the interests of the other two constituent peoples in BH. Croats ‘endured this only because they wanted to keep BH alive in any form’ 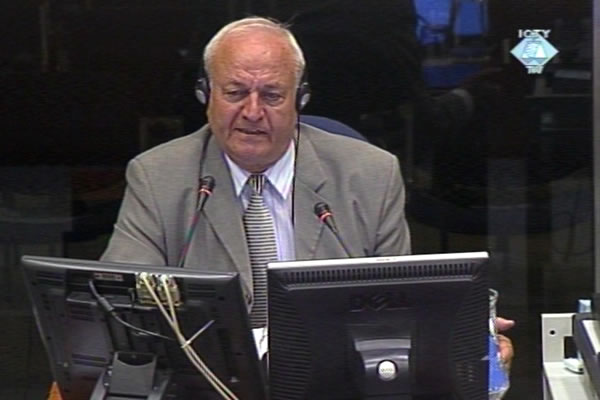 Mile Akmadzic, defence witness of Jadranko Prlic
Mile Akmadzic, wartime BH prime minister from December 1992 until late August 1993, continued his evidence at the trial of the former Herceg Bosna leaders. He said that Alija Izetbegovic had for all intents and purposes usurped power when he refused to step down as the president of the presidency after his second one-year term of office expired in December 1992. The Croat representatives endured this, the witness said, because they ‘wanted to keep BH alive in any form’.

Akmadzic criticized Izetbegovic for ‘acting as head of state’ during his tenure as the president of the presidency instead of being ’the first among the equals’. In his words, already at the negotiations in Geneva in January 1993, Izetbegovic acted like a statesman while in fact he represented the interests of only one of the three peoples. This was reflected, Akmadzic added, in the composition of the delegation Izetbegovic headed at the time: it comprised members of only one ethnic group. When the judges asked him if he believed there should have been a fourth party representing the state of BH, in addition to the representatives of the three peoples, the witness replied that it would have been neither useful nor feasible.

Michael Karnavas, Jadranko Prlic’s US attorney, again put forward the defense argument that Izetbegovic represented interests of only one people. He quoted from David Owen’s book where the author says the BH Presidency was at one moment ‘completely Muslim’. Karnavas corroborated those claims by listing the names of Muslims appointed BH ambassadors to Turkey, Pakistan, Iran, Tunis and some other countries during the war. The witness for his part recounted how he had warned Izetbegovic about this problem, only to have Izetbegovic tell him ‘this is not the right time’ to deal with that, promising he ’will think about the equal status of the peoples later’.

Through this witness, Jadranko Prlic’s defense tried to prove that before open conflict broke out in 1993, the HVO was considered a constituent part of the BH armed forces by the official BH authorities and that Herceg Bosna was seen as a republic within the internationally recognized BH borders. As the witness contends, this tallied completely with the concept of BH advocated by Croatian representatives, a decentralized state of three constituent peoples. However, as the witness put it, the Croats had ‘a lot of trouble’ to prove they are a constituent people to the international community.