PRLIC: HVO WAS THE ‘ONLY MULTI-ETHNIC ARMY’

The defense of the former Herceg Bosna prime minister Jadranko Prlic has called for his conviction to be quashed. According to Prlic, the Croatian Community of Herceg Bosna was established in response to the obvious inability of BH to defend itself against the Serb aggression and to the ‘collapse of the government’ in Sarajevo. It was in fact ‘a community comprising municipalities which functioned as part of BH’ 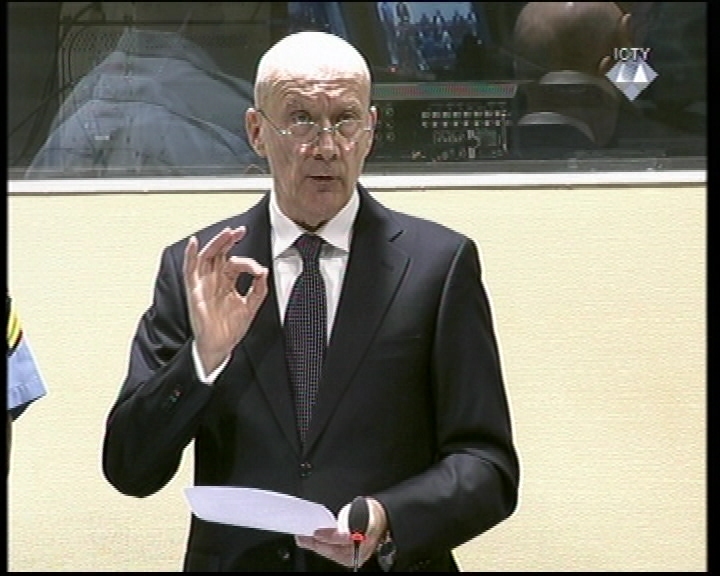 The appellate hearing in the longest trial at the Tribunal started today with a one-hour presentation by former Herceg Bosna prime minister, Jadranko Prlic. The Trial Chamber sentenced him to 25 years in prison for the crimes against non-Croats in Herceg Bosna in 1993 and 1994. According to the trial judgment, those crimes were part of a joint criminal enterprise whose goal was to establish a Croatian entity in BH. Its borders were to coincide with the borders of the Banovina entity in 1939 and it was then to be annexed to Croatia.

Prlic highlighted various elements that the Trial Chamber had ‘failed to take note of’ in the judgment, stating that the Croatian Community of Herceg Bosna was created ‘because the Republic of BH was unprepared to defend itself’ against the Serb aggression and because of the ‘collapse of the government’ in BH, not as a manifestation of ‘a criminal plan’. The Croatian Defense Council (HVO) was ‘the only multi-ethnic army’ in former Yugoslavia and was ‘not a threat to the sovereignty of BH’. The official Herceg Bosna policy was ‘for everyone to stay put in their homes’.

The Croatian Community of Herceg Bosna proved its commitment to peace by accepting all peace deals that were on the table, including the Vance-Owen peace plan from early 1993, Prlic said. The Trial Chamber ‘overlooked’ his personal contribution to the efforts to achieve peace. He ended his presentation by noting that he served as the BH defense minister at the time when its armed forces ‘brought peace’, going on to say, tearfully, that ‘my soldiers died in Srebrenica before that could be achieved’.

Prlic’s lawyer Michael Karnavas said the Trial Chamber had concocted ‘a fake account’ according to which Prlic was at the top of the political hierarchy in Herceg Bosna, contributing substantially to the joint criminal enterprise. According to him, the first-instance judgment was the result of ‘a disregard for evidence’, ‘failure to take context into account’ and ‘blatant and callous failure to consider the defense evidence’.

In his response to Prlic’s defense, prosecutor Douglas Stringer said the HVO had used the Vance-Owen plan as a pretext to ethnically cleanse Bosniaks from the municipalities perceived as Croat. It was implemented because the HVO issued an ultimatum to the BH Army, compelling it to withdraw from the areas that were to belong to Croats under the plan. As for the part played by the accused in the process, Stringer said it was manifest from a number of documents. He highlighted the statements made by the then Croatian president Tudjman and notes made by Mladic in his war diaries.

Prosecutor Catherine Gustafson noted that Prlic had signed the document establishing the Gabela prison, in which thousands of Bosniaks were imprisoned in 1993. He was aware of the horrible conditions in Gabela and Dretelj, because those details were discussed in his presence at the Herceg Bosna cabinet meetings. He also knew that prisoners were taken to the front lines to do forced labor. What did Prlic do, asked the prosecutor, and then went on to answer the question: ‘Nothing’.

The appellate hearing in the case against the former Herceg Bosna leaders will continue tomorrow with the oral arguments presented by Bruno Stojic’s defense.