PROSECUTION: STIFFER SENTENCES FOR ‘THOSE WHO SET THE SCENE' FOR CRIMES

In a very interesting comparative analysis, the prosecutor noted that sentences imposed on Stanisic and Zupljanin were only slightly higher or indeed in some cases milder than those meted out to the direct perpetrators of crimes, although Stanisic and Zupljanin were convicted of crimes that resulted in ‘six-figure number of victims’. The prosecutor consequently called their sentences to be increased from 22 to 30 or 40 years in prison. At the end of the appellate hearing the two accused addressed the Appeals Chamber 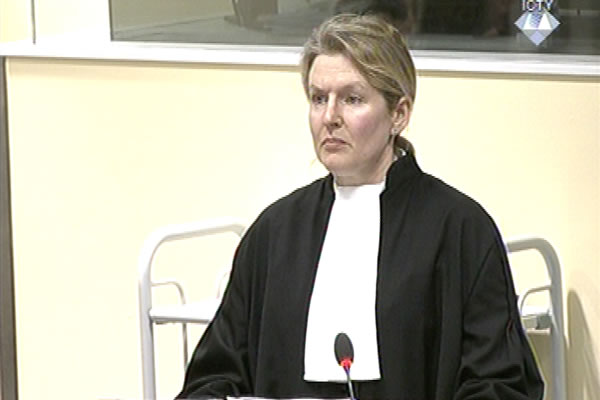 Laurel Baig, prosecutor at the Zupljanin and Stanisic case

As the appellate hearing in the case against former Bosnian Serb police minister Mico Stanisic and the Banja Luka police chief Stojan Zupljanin continued today, the prosecution presented its arguments. Prosecutor Laurel Baig argued why the sentences of 22 years the two accused had received at the trial should be increased.

As the prosecutor noted, Stanisic and Zupljanin were found guilty of involvement in the joint criminal enterprise that resulted in the expulsion of more than 100,000 non-Serb civilians from eight municipalities of the so-called Autonomous Region of Krajina. Stanisic was also convicted of the expulsion of at least 30,000 non-Serbs from 12 municipalities. Stanisic and Zupljanin were both found guilty of at least 2,300 cases of murder, abuse and other crimes in more than 50 prison camps. The number of people detained in the prison camps in Prijedor alone stands at 11,000, at least.

The prosecutor presented a comparative analysis, presenting the sentences received by the direct perpetrators of individual crimes against non-Serbs in BH convicted before the Tribunal. For example, Dragan Mrdja, a member of the Bosnian Serb intervention squad, pleaded guilty to the murder of 150 to 200 civilians in Koricanske Stijene. Mrdja was sentenced to 17 years in prison. For the crimes in Visegrad Mitar Vasiljevic and Sredoje Lukic received 15 and 27 years in prison respectively. Milan Lukic was sentenced to life for the same crimes. Goran Jelisic and Ranko Cesic were sentenced to 40 and 18 years in prison respectively for the crimes in Brcko. Zoran Zigic got 25 years for his involvement in the crimes in Omarska prison camp.

Stanisic and/or Zupljanin were found guilty of most of those crimes. But, despite the fact that the crimes those people were convicted of are only a ‘fraction’ of the crimes Stanisic and Zupljanin are convicted of, their sentences were only slightly higher or even milder than the sentences meted out to the perpetrators of ‘a single crime in a single day in a single municipality’. ‘Crimes with a six-figure number of victims deserve a significantly stiffer sentence than 22 years in prison’, the prosecutor concluded.

Along with quantitative criterion, the prosecution highlighted the qualitative element to Stanisic’s and Zupljanin’s responsibility. Stanisic and Zupljanin were convicted of many more crimes than the direct perpetrators, but their role was also much more significant. The two accused had created conditions and a climate – in other words they ‘set the stage’ – where it was possible to commit many crime in a systematic way. That, the prosecutor added, was yet another reason for a stiffer sentence.

Prosecutor Baig concluded that an adequate sentence shouldn’t be milder than the sentences meted out to Radoslav Brdjanin, the chief of the ARK Crisis Staff, and Milorad Stakic, head of the Prijedor Crisis Staff. In other words, according to the prosecution, Stanisic and Zupljanin shouldn’t receive sentences milder than 30 and 40 years in prison.

At the end of the hearing today, the two accused addressed the Appeals Chamber. Mico Stanisic spoke first. He said that he ‘can’t believe’ that 10 years passed from the time he was indicted. As soon as the indictment was issued against him, he surrendered to the Tribunal and gave the statement to the OTP investigators, Stanisic recalled. He was ‘really sad’ when the Trial Chamber handed down its judgment as, in his view, he had done a lot to prevent the crimes. Stanisic noted that he had confronted the Serb paramilitary units in BH, thus endangering his own life. Stanisic was sorry for all the victims and the war but wanted to be acquitted or at least to be re-tried.

Stojan Zupljanin, Stanisic’s co-accused, complained that the conflict had been ‘difficult to control’. It was ‘impossible to be the police’ in the war, and to respond adequately in some situations, Zupljanin clarified. According to Zupljanin, he tried to prevent crimes but if there were any mistakes, they were not made with malice. ‘It is up to the Appeals Chamber to decide whether I could have done more or better’, Zupljanin concluded.

The appellate hearing was thus completed and now the parties will have to wait for the final judgment.