At the appellate hearing today, the defense teams of Mico Stanisic and Stojan Zupljanin presented their arguments in support of their demand for the trial judgment to be quashed or for the sentence of 22 years in prison to be reduced. Their demands center on the possibility that the proceedings against them may be terminated because of the 'impression' that one of the judges in their trial chamber, Frederik Harhoff, was 'biased'. The prosecution has rejected those demands and has called for stiffer sentences, in the range from 30 to 40 years 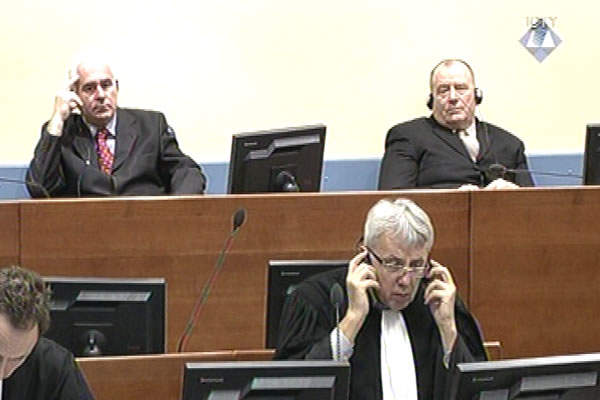 Judging by the length of time devoted to expounding on various elements of the defense appellate briefs, the defense teams of Miso Stanisic and StojanZupljanin have put all their hopes in the bias allegedly shown by Frederik Harhoff, one of the judges in the trial chamber that convicted the former Bosnian Serb police chiefs. In March 2013, Stanisic and Zupljaninwere found guilty because they participated in a joint criminal enterprise whose goal was to expel Muslims and Croats from areas that were to form part of a future Serb state. Both were sentenced to 22 years in prison. Both the defense and the prosecution appealed against the judgment and today the judges heard their oral arguments.

Stanisic's lawyer Stephane Bourgon spoke the longest: he demanded that the proceedings against the former Bosnian Serb police minister be terminated and that his client be released forthwith, because of the 'impression' that Judge Harhoff was 'biased. The Danish judge had made some remarks that create such an impression in a private letter he had sent to 56 friends. The letter was leaked to the public two months after the judgment was rendered in the Stanisic and Zupljanin case. In the letter, the Danish judge expressed his dissatisfaction over a series of acquittals and the new jurisprudence that made it harder to convict high-ranking officials for their part in joint criminal enterprises. The defense believes that this is clear evidence of bias and invokes the conclusion of the special panel which had disqualified Harhoff from Vojislav Seselj's trial.

If the argument is not accepted, the defense also contends that the trial judgment failed to properly evaluate two key issues: Stanisic's intent to commit crimes and the specific acts which constitute his contribution to the implementation of the joint criminal enterprise. According to the defense, the conclusions do not go beyond the fact that he was the police minister, without any specific evidence that he had set up and implemented a criminal plan. The trial chamber applied the 'Superman standard', whereby Stanisic was obliged to do the impossible, i.e. to prevent the crimes committed by the police.

In its response, the prosecution highlighted the evidence on the intent of the accused: the fact that he was implementing the policies of the Serbian Democratic Party designed to create an ethnically pure state in BH, was close to the other participants in the joint criminal enterprise such as Radovan Karadzic and Zeljko Raznatovic Arkan, and that he knew about the crimes yet failed to act. Stanisic's contribution to the implementation of the criminal enterprise was very concrete, the prosecution contends: he took part in defining the SDS leadership policy, used the police units to carry out the campaign of violence and created a climate of impunity, which all resulted in the exodus of the non-Serbs.

As far as Judge Harhoff is concerned, the prosecution considers that the special panel in the Seselj case was wrong when Harhoff was disqualified and the same mistake should not be made in other cases. According to the prosecution, in the controversial letter the Danish judge presented his personal view on the new course the Tribunal had taken, and he was fully entitled to it. In the judgment in the case against Stanisic and Zupljanin, he applied the valid standards, even though he may not have agreed with them, such as the requirement for the existence of a direct intent to commit crimes in order to secure a conviction for participation in a joint criminal enterprise.

Stojan Zupljanin's defense disagreed with that argument. According to Zupljanin's lawyers, the erstwhile chief of the Banja Luka Security Services Centre was sentenced in the absence of any evidence of his direct intent to commit crimes. This is in line with Harhoff's alleged bias in favor of convicting all members of the leadership that planned and implemented the criminal plan, without much evidence to support those convictions. Lawyer Dragan Krgovic claims that as many 80 per cent of police officers were under the military command 1992 and the accused could therefore not punish them. 'Zupljanin had his work cut out controlling those who had not been resubordinated to the army, let alone those who had been,' Krgovic concluded. The defense believes there is no evidence of Zupljanin's guilt and he should therefore be acquitted or at least see his sentence drastically reduced, especially in light of the fact that he protected civilians and saved 'at least a thousand civilians' from certain death.

In its response, the prosecution states that in fact Zupljanin 'protected perpetrators, not non-Serb civilians' and that he made an active contribution to the campaign of violence against non-Serbs, by employing criminals as police officers and dispatching units that committed crimes to areas throughout Krajina. He received reports about those crimes. Furthermore, he covered up many crimes such as the mass murders at Koricanske stijene and in front of the Manjaca camp. This was not merely the result of the wartime events, as the defense argues, but of Zupljanin's decision to 'act and willfully fail to act' in a way that contributed to the murders, unlawful imprisonment, abuse and other crimes that resulted in the ethnic cleansing of the Krajina municipalities.

The hearing will continue with the prosecution's arguments about the severity of the sentences. At the end of the hearing, the two accused will have an opportunity to address the judges.