Zdravko Tolimir, Mladic’s former assistant for security and intelligence in the VRS Main Staff, has passed away in the UN Detention Unit in Scheveningen. Tolimir was awaiting transfer to a country where he would serve his sentence. Tolimir’s life sentence for his involvement in genocide and other crimes in Srebrenica and Zepa in 1995 was confirmed ten months ago 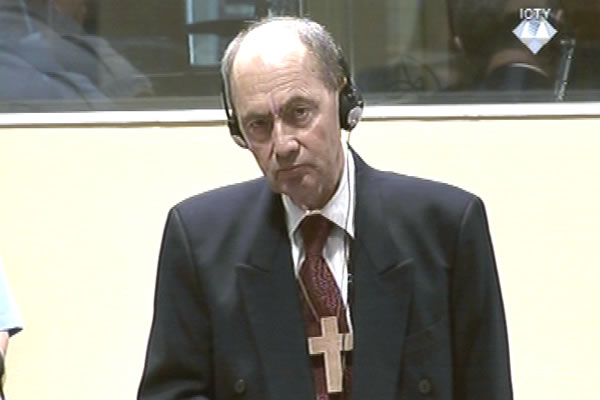 Zdravko Tolimir, who was the assistant for security and intelligence to the VRS Main Staff commander during the war in BH, passed away in the UN Detention Unit in Scheveningen in the night of 8 February 2016, the Mechanism for International Criminal Tribunals has announced. According to the Dutch law and standard procedure, the Dutch authorities have opened an inquest into Tolimir’s death. Judge Theodor Meron, the President of the Mechanism, has also ordered an enquiry and has put Judge Vagn Joensen in charge.

Tolimir was in the Tribunal’s Detention Unit awaiting transfer to a country where he would serve his life sentence. In December 2012 the Trial Chamber found Tolimir guilty of genocide, complicity to commit genocide, extermination, murder, persecution and forcible transfer of Srebrenica and Zepa population in July 1995.

In April 2015, the Appeals Chamber confirmed the judgment accepting the Trial Chamber’s findings that Tolimir had ‘actively participated and significantly contributed’ to the implementation of two joint criminal enterprises – the killing of able-bodied men from Srebrenica and the expulsion of the Muslim population from Srebrenica and Zepa. As a result, ‘thousands of Bosnian Muslims from Srebrenica were executed and thousands of civilians from the two enclaves were forcibly removed’.

Tolimir was transferred to the Tribunal’s Detention Unit in June 2007. At the beginning, Tolimir complained of ill health as he survived a few strokes. As time went by,Tolimir recovered thanks to ‘prayers and herbal infusions’, as he explained. The last time Tolimir addressed the issue of his health was in February 2015, when he told the pre-appeal judge about his heart surgery. The surgeons put four stents in his blood vessels.