CAN GENOCIDE CONVENTION APPLY TO WORLD WAR I?

Professors Andreas Zimmermann and Christian Tams, from the Serbian legal team, contest the jurisdiction of the International Court of Justice for the crimes committed before 27 April 1992 when the Federal Republic of Yugoslavia was officially constituted as a state. ‘If Croatia’s arguments are accepted, the doors of the Peace Palace will be left wide open for new suits for the crimes committed a long time ago’, Zimmermann warned 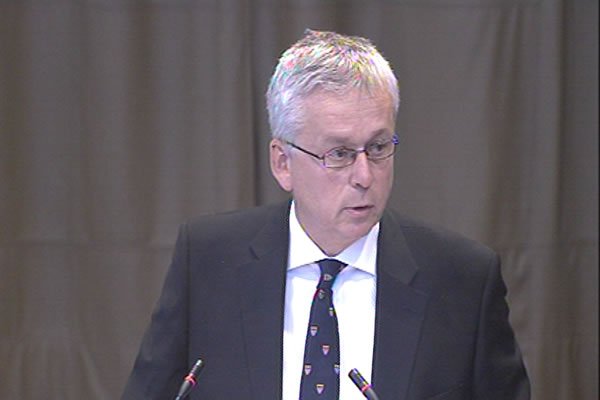 In the three hours of their presentation, Andreas Zimmermann and Christian Tams, members of the Serbian legal team, contested the jurisdiction of the International Court of Justice to hear the suit Croatia has filed against Serbia for the violations of the Convention for the Prevention and Punishment of the Crime of Genocide. The Serbian team claimed that the court had no jurisdiction over the crimes committed before 27 April 1992 when the Federal Republic of Yugoslavia formally came into existence.

Zimmermann quoted from a cable sent from the US Embassy in Zagreb, which was published on the Wikileaks website. In the cable, the former head of the Croatian legal team, Professor Ivan Simonovic warns that if the Court found it had jurisdiction in the case against Serbia only from 27 April 1992 on, the gravest crimes committed in Croatia would remain outside the Court’s jurisdiction. The same cable states that Croatia had been 'persuaded' to file the suit against Serbia 'by a US lawyer, with a view to paralyze the prosecution of Croats before the International Criminal Tribunal for the former Yugoslavia’. According to Zimmermann, in order to keep the genocide accusations valid, Croatia had to rely on the crimes committed in 1991 and this is why it had to 'invent' a number of arguments to extend the Court’s temporal jurisdiction to the period before 27 April 1992.

According to Zimmermann, Serbia assumed the obligations from the Genocide Convention only when it was formally constituted as a state on 27 April 1992. This date was established as the day when the new state came into existence in an earlier judgment issued by the International Court of Justice in 2008, and in the opinion of the Badinter Commission. On the other hand, Croatia was bound by the provisions of the Genocide Convention as of 8 October 1991. To sustain the jurisdiction argument, Croatia had to prove that the Genocide Convention could be applied retroactively, and that is not the case, the Serbian representatives noted.

If the Court were to accept the retroactive application of the Genocide Convention, this would mean that its provisions would apply to the crimes committed in the World War II or even in the World War I, Tams cautioned. ‘Would Germany or other states responsible for grave crimes that might be qualified as genocide have agreed to ratify the Convention that would be applicable without any time limits?’, asked Tams. ‘The Convention's objective is prevention, it looks to the future and not to the past’, Professor Tams concluded.

Concluding the presentation today, Professor Zimmermann noted that if Croatia’s arguments were to be accepted, both ‘as to the merits of the case or the issue of the jurisdiction of the Court and attributability, the doors of the Peace Palace would be left wide open to new suits pertaining to the crimes from long ago’.

The Serbian side will continue responding to the Croatian suit tomorrow. After that Serbia will present the allegations from its counter-suit against Croatia, filed in January 2010. Serbia contends that genocide was committed against Serbs during and after Operation Storm in the summer of 1995.