IS THERE EVIDENCE OF SERBIA’S ‘GENOCIDAL INTENT’?

In his presentation on Serbia’s intent ‘to destroy in part or as a whole the non-Serb population in Croatia’ British barrister Keir Starmer mentioned 17 factors that in his view corroborate the existence of this intent. Does the International Court of Justice have jurisdiction to adjudicate the events that happened before 27 April 1992 when Yugoslavia was formally constituted as a state? 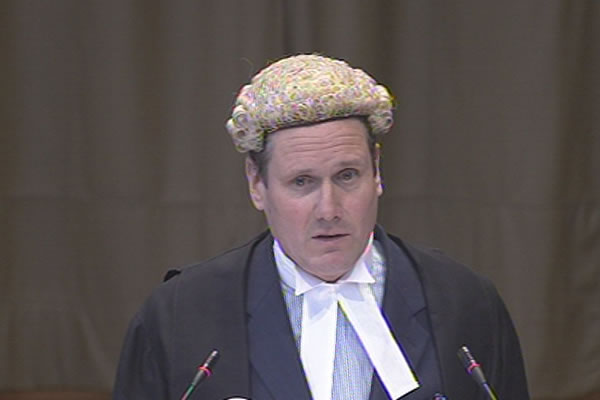 On Thursday, Croatia’s representatives focused on Serbia’s ‘genocidal behavior’. Today, British barrister Sir Keir Starmer spoke about Belgrade’s ‘genocidal intent’ in the 1991-1995 war; the intent was to destroy ‘in part or as a whole’ the non-Serb population in parts of Croatia. Starmer delivered the presentation on behalf of Croatia’s legal team. In July 1999, Croatia filed a suit against Serbia accusing it of violations of the Convention for the Prevention and Punishment of the Crime of Genocide.

In a lengthy presentation, Starmer stressed that the goal of the joint criminal enterprise set up by the Serbian leadership was to ‘establish control over one third of the Croatian territory to transform it into a state under the Serb domination’. The twin motives of the Serbian leadership were to annex the territory that belonged to the other state and to create an ethnically pure Greater Serbia, Starmer said. The scope of the crimes, including widespread killings, torture, sexual violence and deportations, showed the ‘clear intent’ of the Serbian leadership, the JNA and the forces under its control to ‘destroy the majority of the Croatian population living in that territory’, Starmer argued.

As the British barrister noted, the evidence of the genocidal intent can be found in the ‘Serbian political doctrine that had paved the way for the genocidal policy directed at destroying the Croatian population’. According to Starmer, the statements and speeches of the Serbian politicians, the propaganda in the Serbian media and the video evidence corroborated the argument. So did the disproportionate military force used to attack the Croatian villages and towns. There was also the admission of the JNA that the members of the paramilitary formations ‘committed genocide’ and the close cooperation of the various Serbian forces. Widespread attacks and the fact that they specifically targeted the Croatian population, the marking of Croats with white bands, the number of persons who were killed and gone missing, the gravity of the injuries, the use of derogatory language, forcible transfers, systematic devastation and destruction of religious and cultural monuments, demographic changes and, finally Serbia’s failure to punish the perpetrators of the crimes were all evidence of the genocidal intent.

As Starmer recalled, after the capture of Vukovar on 18 November 1991 Serbia had the chance to show that its intention had been ‘merely’ to transfer the population. But, as Starmer argued, when about 300 persons were taken out of the Vukovar Hospital and at least 194 of them executed at the Ovcara farm, that chance was gone.

James Crawford, international law professor, brought to a close the first stage of the presentation of oral arguments by Croatia. He addressed the issue of jurisdiction. In the preliminary proceedings Serbia had argued that the Court lacked jurisdiction over the events before 27 April 1992 when the Federal Republic of Yugoslavia, which is in effect Serbia, formally came into existence. Belgrade’s representatives argued that until then Serbia hadn’t been a member of the UN and a party to the Genocide Convention.

As Professor Crawford argued, the jurisdiction of the International Court of Justice is based on the law of the succession of states. A new state assumes the rights and obligations of the predecessor state, including the obligations under international treaties. According to Crawford, there is evidence that the JNA actions could be attributed to Serbia. Whether at time of the commission of the crimes Serbia was constituted as a state or not is not relevant for the jurisdiction of the court to obtain, Crawford said. Regardless of whether Serbia was an existent or a new state constituted by the Constitution of 27 April 1992, Serbia was bound at all times by the provisions of the Convention for the Prevention and Punishment of the Crime of Genocide. The Court has jurisdiction to adjudicate in matters that pertain to the violations of the Convention, Crawford concluded.

The public hearing in the Croatia vs. Serbia case continues on Monday when Serbia’s representatives will respond to the arguments presented by the Croatian side. Serbia will then present arguments in support of the allegations in the counter-suit filed in January 2010 against Croatia. Serbia accused Croatia that it committed genocide against the Serb population in Croatia before, during and after Operation Storm in the summer of 1995.