‘KRAJINA SERBS NO LONGER EXIST AS A GROUP’

Head of the Serbian legal team Sasa Obradovic claims the intent to commit genocide against the Krajina Serbs was made evident at the Brioni meeting. The intent was realized afterwards, in the mass crimes and the efforts to prevent the Serb refugees from returning. After the Tribunal’s Appeals Chamber reversed the conviction of Croatian generals Gotovina and Markac, Serbia expects the International Court of Justice to find legal remedy for an ‘untenable situation’ and deliver justice to the victims of Operation Storm 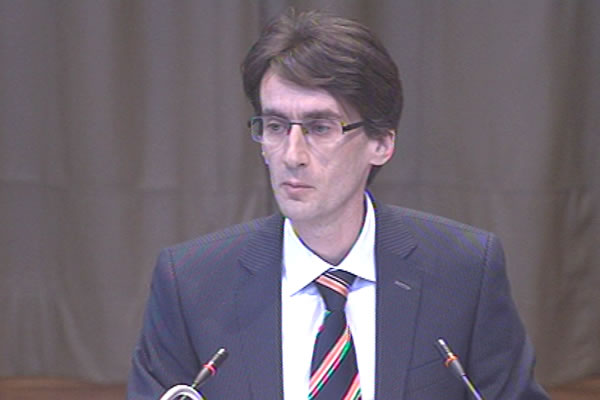 In the presentation at the International Court of Justice, Serbia’s legal team explained in detail the counter-claim that Croatia was responsible for the genocide against the Serbs in Krajina in Operation Storm in 1995. In a three-hour hearing, the head of the Serbian team Sasa Obradovic was the only one to address the court. According to him, Operation Storm was planned and implemented with the intent to destroy the Krajina Serbs as a group, i.e. to commit genocide.

In an effort to prove the existence of this intent, the Serbian legal team – it was noted yesterday – ‘relies heavily’ on the transcript of the meeting between Croatian president Franjo Tudjman and top-ranking state officials on 31 July 1995, at Brioni, five days before Operation Storm was launched. Tudjman ordered his army chiefs to ‘inflict such blows that the Serbs will, to all practical purposes, disappear’, and this was interpreted as a clear intent to destroy the whole group. The Croatian president said at Brioni that the ‘civilians should be given a way out, […] then the army would follow them”, because ‘they will have psychological impact on each other’. As Obradovic stressed, this was a clear sign that the entire Serb population of Krajina was the enemy, not only the soldiers. Obradovic highlighted the part of the transcript where Tudjman orders his soldiers to ‘leave the way out for civilians’, allowing them to flee while ‘pretending to guarantee civil rights, et cetera’.

In the Tribunal’s trial judgment against Gotovina and Markac the Brioni meeting was described as proof of the existence of the joint criminal enterprise aimed at expelling Serbs from Krajina. The generals were acquitted on appeal and the conclusion about the existence of the joint criminal enterprise was reversed. According to the Serbian legal team, the appellate judges overlooked the importance of the Brioni transcript. Serbia expects the ‘United Nations’ highest court’ to provide legal remedy for this ‘untenable situation’ and deliver justice to the victims of Operation Storm.

The genocide plan from Brioni was implemented in the course of Operation Storm through ‘systematic, mass and widespread crimes’ against the Krajina Serbs and their property, Obradovic noted. The implementation began with the indiscriminate shelling of Knin and other Krajina towns and villages: a large number of civilians fled as a result. The Serbian legal team also recalled the separate opinion of Judge Agius, who sat on the Tribunal’s Appeals Chamber. Judge Agius noted that in one day and a half, on 4 and 5 August 1995, 900 shells were fired on the town that was offering no resistance.

Relying in part on the evidence admitted in the case against the Croatian generals and to a larger extent on the information obtained from the Serbian non-governmental organization Veritas and the testimony of their witnesses, the Serbian legal team presented their figures for the murders of Serbs in Krajina after the arrival of the Croatian forces. According to the data supplied by Veritas, of 1,719 Serbs killed in and after Operation Storm, 1,513 persons were killed in the period from 4 to 12 August 1995. There were 887 civilian victims. Obradovic pinpointed the numerous crime scenes located along the route taken by the Croatian troops as they advanced, and highlighted the attacks of the Croatian artillery and soldiers on the refugee columns. Those were not isolated incidents, Obradovic noted, but a systematic campaign. Only those who fled or took shelter before the onslaught of the perpetrators were able to avoid becoming victims.

As Obradovic recalled, the systematic and widespread destruction and burning of Serb houses followed, in a bid to prevent the Serbs from returning. The commander of the UN forces in Krajina General Forand has said so in an interview. A report by the European monitors in September 1995 states that 73 per cent of the Serb houses had been burned by that time. A UN report from November 1995 states that a total of 17,270 buildings were destroyed. Given the administrative measures to prevent the return of the Serbs, there is no doubt that it was an attempt to destroy an ethnic group and wipe it out in the Krajina territory.

As the Serbian legal team argued, the attempt was successful. ‘Today Krajina Serbs don’t exist as such. They cannot be found anywhere as a separate group, not even in Serbia where most of them had gone refugees because today they are intermingled with the local Serbs. Their unique and recognizable culture has been erased’, Obradovic said.