Croatia’s representatives highlighted the time frame and territorial context of the individual crimes committed against the Croatian population. They explained how the crimes committed by the JNA and forces under its control can legally be attributed to Serbia, and why in their view Serbia is responsible for the failure to prevent crimes and punish perpetrators and is guilty of the conspiracy to commit genocide 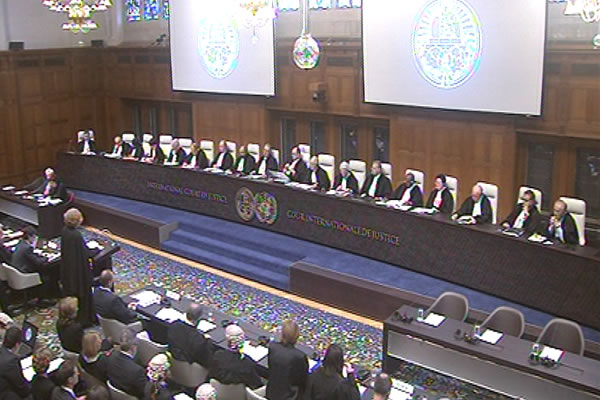 Representatives of Croatia and Serbia in the ICJ

The public hearing on the merits of the case brought in July 1999 by Croatia against Serbia for violations of the provisions of the Convention for the Prevention and Punishment of the Crime of Genocide continued today with the argument presented by Davorin Lapas and Vesna Crnic Grotic, professors of international law.

Lapas spoke about the time frame and the territorial context of the widespread ‘campaign carried out by the Serbian forces’. According to Lapas, the campaign began in August 1991 with the attacks on Dalj and Erdut, Croatian villages in Eastern Slavonia. Murders, detention, torture and rapes were then committed in the villages of Berak, Donji Caglic, Dalj, Lovas, Hrvatska Dubica, Kostajnica, Bacin, Siroka Kula, Bogdanovci, Klisa, Vocin, Vukovar, Jasenica, Bruska… The crimes committed by the JNA, the paramilitary formations, the Krajina police, the volunteers and the Territorial Defense were directed against the civilians with a clear intent to ‘destroy’ the Croatian population in those areas. In Lapas’s words, all those who remained, most of them the elderly who 'could not flee', were targeted for destruction.

As the law professor from Zagreb noted, more than 3,600 victims have been recovered from 142 mass graves. About 3,200 of the bodies have been identified. According to the expert report, 28 per cent of the victims were women, and almost 38 per cent were older than 60. The bodies of 37 young people under the age of 18 have been exhumed from mass graves. Although about 100 bodies have been transferred to Croatia from Serbia, hundreds are still missing and have been ‘denied the right to burial’, Lapas said.

In a painful presentation about the crimes against the Croatian population, Croatia’s representative Vesna Crnic Grotic recalled that ‘rape is a constituent act of genocide’. The intent of the Serbian forces was to ‘extirpate the Croatian seed’. Women and men were sexually abused, often in their homes, in front of their youngest family members, Crnic Grotic said. The detainees in the prison camps in Serbia – in Begejci near Zrenjanin and in Sremska Mitrovica – had ‘their eyes and teeth removed, their noses and ears cut off’, and the victims often ‘wished to die’ as the only way to escape the torture.

As Crnic Grotic noted, Zagreb has laid before the Court comprehensive and irrefutable evidence of incidents involving murders, beating, torture and mutilation which were a ‘component of the terror campaign’ conducted against ‘the innocent Croatian population’. The ‘violence was not justified by military necessity and its only goal was the desire to cleanse the Croatian territory of the non-Serb population’, said Crnic Grotic.

Professor James Crawford argued as to why in legal terms the blame for the genocide in Croatia could be laid on Serbia. He stressed that the JNA and its subordinate regular and paramilitary formations committed the crimes. As Crawford explained, the Tribunal’s judgments, particularly the trial judgment in the Vukovar Three case, show that the JNA had ‘effective command and control over all forces in the field’ in line with the principle of single command.

Although the Federal Republic of Yugoslavia, and that in effect means Serbia, did not come into existence before 27 April 1992, by that time, it had taken over the control of the federal bodies in the former Yugoslavia including the JNA and the forces under its control, Crawford claimed. According to him, even if the actions of those forces couldn’t be attributed to Serbia, Serbia was still responsible for the failure to prevent genocide and punish perpetrators.

London barrister Sir Keir Starmer elaborated the issue, noting that Croatia’s suit was based on three arguments. In addition to being responsible for JNA’s actions and the failure the punish perpetrators, Serbia was guilty of the conspiracy to commit genocide, Starmer said. The British lawyer contends that the Tribunal’s judgments in two cases, against Martic and Babic, proved the existence of the joint criminal enterprise aimed at the commission of crimes against the Croatian population in the territories Serbs saw as parts of Greater Serbia. This was done with the intent to partially destroy the Croatian ethnic group in order to create an ethnically cleansed, homogenous Serbian state.

As the hearing today drew to a close Starmer said that the elements of that crime were clearly established: the JNA committed the crimes, and it was not acting as an independent party but as a ‘de facto organ’ of Serbia, exercising control over all Serbian forces, which directly committed the crimes. Starmer dismissed Serbia's argument that the crimes had been committed by ‘individuals out of control in an otherwise legal armed conflict’. The public hearing continues tomorrow with the arguments on the intent to commit genocide.