In a bid to prove that Croatia was responsible for the genocide against Serbs in Operation Storm, the Serbian legal team relied on what Franjo Tudjman had said at the famous Brioni meeting as an indication of the intent to commit genocide. The Serbian team also presented the testimonies of former UN soldiers who had served in Krajina, the Serb victims and the expert Savo Strbac, who claimed he had a list of 1,713 Serb victims killed in Operation Storm 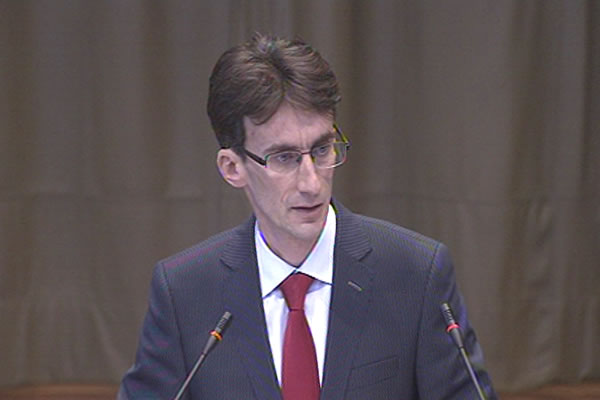 In the second part of the hearing before the International Court of Justice, the Serbian legal team presented their arguments in support of the allegations that Croatia was responsible for the genocide in Operation Storm. Sasa Obradovic, head of the team, said that Serbia had a ‘legitimate interest’ to seek legal redress for its nationals, 150,000 of whom had fled to Serbia. One third of them still live there today.

In its effort to prove the intent to commit genocide, Serbia ‘relies strongly’ on the transcripts of the Brioni meeting between Croatian president Franjo Tudjman and Croatia’s top political, military and police officials on 31 July 1995. A plan was made then, Obradovic argued, to destroy a ‘part of Serb ethnic group in Krajina’ during Operation Storm: this was an element of genocide. Other incidents in Operation Storm, such as the indiscriminate shelling of the Krajina towns, forcible transfer of civilians, mass murder of Serbs who had decided to stay, attacks on refugee columns, looting and destruction of abandoned houses, and eventually, the introduction of administrative measures to prevent Serb refugees from returning, all point to the existence of the intent to commit genocide, the Serb legal team claimed.

Serbia also relies on a number of documents such as the reports of the UN and European observers who were in Krajina during Operation Storm, and the reports of the Croatian Helsinki Committee and the Serb non-governmental organization Veritas. The Serbian legal team accepted that there were some mistakes in the documents, but when all was said and done, they tallied. The documents prove that the Krajina Serbs were the victims in Operation Storm, and that the Croatian soldiers and police were the perpetrators.

Serbia also presented the statements of seven factual witnesses and one witness-expert. The statements were admitted into evidence, and the Croatian side decided not to cross-examine the witnesses. Lawyers Wayne Jordash and Novak Lukic briefly went through the salient points in the witnesses’ statements. Some of the witnesses gave evidence before the Tribunal at the trial of the three Croatian generals. The Serbian team claimed that the Appeals Chamber’s decision to quash Gotovina’s and Markac’s convictions didn’t diminish the evidentiary value of the witnesses’ evidence.

The first two witnesses called by Serbia had served in the UN forces. Canadian officers Jeffrey Hill and Andrew Leslie described the shelling of the Krajina towns as ‘harassing fire’ directed against the civilians. In their reports, Hill and Leslie stated that they saw numerous bodies as well as burned and looted houses when they visited the area taken by the Croatian army and police.

The second group comprises five Serb witnesses who lived in Krajina at the time of Operation Storm: Bozo Susa, Mirko Mrkobrad, Jela Ugarkovic, Ilija Babic and Mile Sovilj. The witnesses claimed that Operation Storm began with a comprehensive and indiscriminate shelling; the civilians fled, the Croat forces attacked the refugee columns and those who decided to stay were killed, including some close relatives of the witnesses.

Serbia’s last witness was expert Savo Strbac, president of the Veritas Documentation Center, which has been collecting the information on the Serb victims in Croatia. According to Strbac, Veritas has registered 6,284 Serb victims during the entire war in Croatia. Of that number, 1,713 Serbs were killed in Operation Storm, and 254 were killed in the attacks on the refugee columns.

The hearing continues tomorrow. The Serbian legal team will continue presenting its arguments.