Bosnian Serb officers, convicted by the Trial Chamber of genocide and other crimes after the fall of Srebrenica, have apologized to the victims, regretted the crimes but denied their role in them 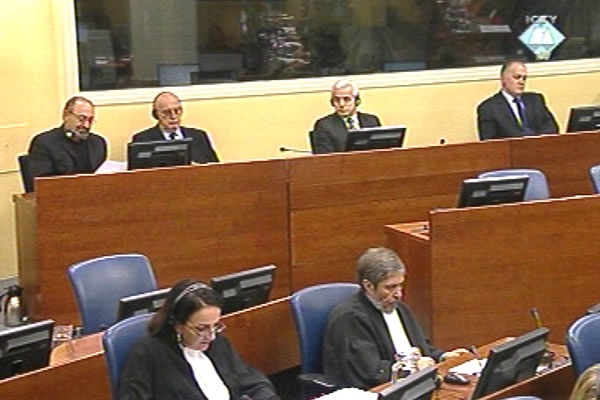 At the end of the appellate hearing at the trial of the Srebrenica genocide, four of the five accused took the opportunity to address the Appeals Chamber. The first was Vujadin Popovic, former chief of security in the Drina Corps, who was sentenced to life for his involvement in the genocide. Popovic was surprised by the Trial Chamber’s conclusion that he had perpetrated genocide and that Radislav Krstic, the commander of Popovic’s Corps, ‘merely aided’ him. Krstic had been sentenced by the Tribunal to 35 years in prison for aiding and abetting genocide. It would appear, based on the trial judgment, that the genocide was committed by three military security officers, but not by any of the commanders of the units that took part in the actual executions and expulsions, Popovic stressed.

Popovic said he never ordered any murders, that he was not at any of the execution sites and had not contributed to the murder operation in any way. Why was the evidence turned upside-down, he asked, and provided the answer right away: because many other people charged with the Srebrenica genocide had spent time together in the Tribunal’s Detention Unit and could plan how to shift the blame on others. It was an ‘empty chair situation’, where those who were not present got all the blame, including him, Popovic explained.

Security chief in the VRS Main Staff Ljubisa Beara, who was given a life sentence too, declined the opportunity to address the Appeals Chamber, as he had nothing to say. Drago Nikolic, chief of security in the Zvornik Brigade, was rather more eloquent. Nikolic said he was ‘sincerely sorry for the people who were killed’ wishing ‘that it had never happened’. When the murder operation began, Nikolic said, he tried to keep himself and the military police soldiers away from the operation. Now, Nikolic was aware that he is ‘paying the price’, a 35-year sentence, for his failure to do so. The Appeals Chamber can increase or reduce his sentence, of course.

Former commander of the Zvornik Brigade Vinko Pandurevic delivered a brief lecture on the role of military commanders who often didn’t control their units. Pandurevic added that the VRS was a decentralized structure in which officers could hardly do ‘micromanagement’. Executions were carried out by those who belonged to ‘other structures’ in the Bosnian Serb army. Some soldiers from his brigade did take part in the killings, but on someone else’s order, Pandurevic explained. Pandurevic felt sympathy for the victims and apologized on his and his brigade’s behalf. Pandurevic has already served two thirds of his 13-year sentence and is hoping he would be granted early release soon.

Radivoje Miletic did not attend the appellate hearing. His defense counsel Natasa Faveau read out a written statement written by Miletic in the Detention Unit. Miletic once against insisted that his role in the drafting of Directive 7, which was in effect the order for an unlawful attack on the enclaves in Eastern Bosnia, was limited, as his defense had already argued. Miletic denied his involvement in the crimes. Miletic believes ‘there can be no justification for any crime’. He claims he is ‘an honorable man’ with nothing to be ashamed of, a man who can look everyone ‘in the eye’, despite the fact that he was sentenced to 19 years in prison. As Miletic said, ‘I bow my head’ before the victims. He offered his condolence to their families.

The appellate hearing in the Srebrenica Five case was thus completed. We must now await the appellate judgment.