DRAGO NIKOLIC ARGUES HE WAS ‘NOBODY’

On the third day of the appellate hearing for the Srebrenica genocide, the defense of the former Zvornik Brigade security chief tried hard to play down Nikolic’s role in the operation to kill the captured men and boys. According to Nikolic’s defense, his 35-year sentence should be reduced even if all findings in the trial judgment were to remain in force. The prosecution called for a harsher sentence for the man who ‘did everything to make the killing machinery function smoothly’ in July 1995 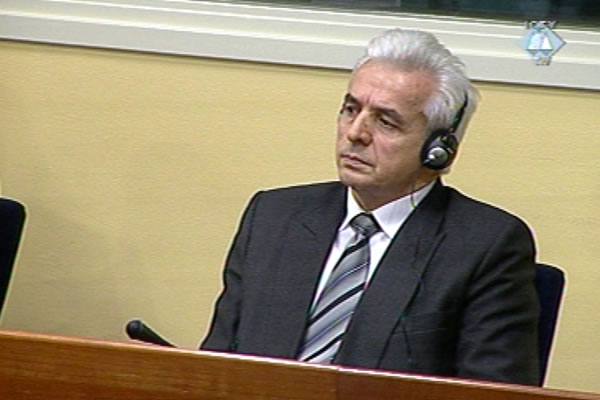 Drago Nikolic in the courtroom

The defense of Drago Nikolic, former security chief in the VRS Zvornik Brigade, didn’t deny that ‘absolute horror’ ensued after the fall of Srebrenica in July 1995. However, Nikolic’s defense did contest the Trial Chamber’s finding that the accused played a significant role in the events. Nikolic was sentenced to 35 years in prison for his part in the genocide. According to his defense, the judges’ conclusion that Nikolic participated in the joint criminal enterprise aimed at killing all the captured men and boys after the fall of Srebrenica and that Nikolic thus aided the commission of genocide was erroneous.

Defense counsel Stephane Bourgon noted that Nikolic’s ‘limited role’ was reflected in the fact that he was in the school in Orahovac near Zvornik where prisoners were detained before the execution, and that he was involved in organizing the accommodation for the prisoners on two other locations, in Kozluk and Rocevici. ‘And that is all’, the defense counsel said, as far as Nikolic’s involvement in the killings is concerned. Apart from that, Nikolic’s role was minimal and he was sentenced only because he was a security officer, Bourgon argued.

According to the defense, Nikolic was ‘a nobody’, an officer of lower rank who ‘was not consulted on anything’. As a security officer Nikolic investigated his colleagues and ‘was not much liked’ in the brigade. People thought Nikolic was a man ‘whose ambition was greater than his abilities’. As the defense claimed, Nikolic was dragged into the operation to kill the Srebrenica against his will, and ‘he managed to get out of that nightmare’. Nikolic denied that he was close to his colleagues in the dock, the security chief in the Main Staff Ljubisa Beara and the Drina Corps chief of security Vujadin Popovic. The two were sentenced to life for their part in the organization of the killings. Nikolic argued that he didn’t know about their intent to commit genocide, although he was aware that a large-scale operation to kill the prisoners was underway.

Finally, according to the defense, even if all the findings in the trial judgment remained in place, the 35-year sentence should be significantly reduced in line with the current Tribunal’s practice.

From the prosecution’s point of view, the sentence was ‘obviously inadequate’ and the appellate judges should make it harsher. Nikolic should be convicted of genocide, not only of aiding and abetting. Today, the prosecutor argued that Nikolic’s role was much bigger than what the defense tried to depict. Nikolic organized the intake and accommodation of prisoners brought in from Bratunac to the Zvornik area. Nikolic was present at several locations where the prisoners were detained, such as the schools in Orahovac, Kula and Petkovci, as well as at the actual execution site in Orahovac, when the prisoners were executed. Also, at all times Nikolic was in touch with Beara and Popovic, and he issued orders to execute the prisoners and supplied equipment to the firing squads.

‘Drago Nikolic was aware of the enormity of the operation to kill the prisoners in which he participated and did everything he could to make sure the killing machinery functioned smoothly’, the prosecutor concluded.

As the hearing continued, the defense of Vinko Pandurevic started delivering the appellate arguments. Pandurevic, the fourth of the five appellants in the Srebrenica crimes case, was sentenced to 13 years.