Before the Appeals Chamber, Vinko Pandurevic's defense argued that the accused couldn’t have done anything to influence the killing of the Srebrenica prisoners. As Pandurevic’s defense noted, Ljubisa Beara and Vujadin Popovic carried out the operation on Ratko Mladic’s orders. The prosecution said in response that Pandurevic could have issued at least ‘one single order’ to investigate the crimes that involved the soldiers subordinated to him 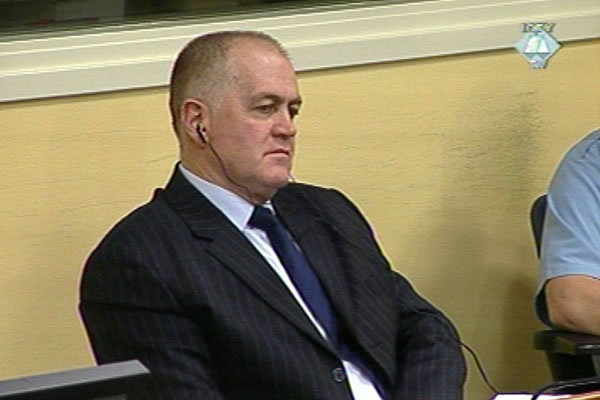 Vinko Pandurevic in the courtroom

Unlike the previous three appellants, Popovic, Beara and Nikolic, Vinko Pandurevic was not convicted of participating in or aiding genocide. The former commander of the Zvornik Brigade was found guilty of aiding and abetting murder, persecution and forcible transfer after the fall of Srebrenica in July 1995. In the oral arguments presenting their appeal against the judgment, Pandurevic’s defense lawyers said he should not have been convicted of that either, because he did not have effective control over the brigade and his omissions were not ‘specifically directed’ to the commission of the crime.

On 15 July 1995, Pandurevic led the Tactical Group One in the attack on Srebrenica and fighting around the enclave, the defense recalled. Up until that moment, Pandurevic didn’t have anything to do with the killings. Pandurevic was convicted because on his return to the brigade headquarters he learned from other officers that crimes were being committed but failed to do anything to prevent them. According to defense counsel Peter Hayens, on 15 July 1995 and in the following days, Pandurevic was unable to establish effective control over the brigade, and particularly over its ‘small and scattered elements’ involved in killing the captured Muslims at several execution sites near Zvornik. Pandurevic’s defense contends that the security chief in the Main Staff Ljubisa Beara and the Drina Corps chief of security Vujadin Popovic organized the mass executions on Ratko Mladic’s orders. Pandurevic couldn’t prevent them and didn’t have the power to do it.

If there were omissions, they were not ‘directed specifically’ to the commission of the crimes, the defense counsel argued. Pandurevic, just like General Momcilo Perisic, was not at the crime scenes at the time when the crimes were committed. The argument presented by the defense follows a specific form of ‘specific direction’ that was first introduced in Perisic’s appellate judgment. Pandurevic’s defense used a hypothetical example to describe this view of ‘specific direction’. A guard standing in front of a room where a prisoner is being beaten is aiding the crime. If he leaves his guard post and walks away, he can’t be held responsible. This is what, according to the defense, happened in Perisic’s case: Perisic was in Belgrade when crimes were committed in Srebrenica and Sarajevo, and it also holds true for Pandurevic: he was on the frontline or in the military barracks while his subordinates participated in mass executions.

In response to the defense arguments, the prosecution rejected ‘specific direction’ as it was used in the Perisic judgment. However, even if it were accepted in that form, Pandurevic could still be found guilty. The prosecutor argued today that it wasn’t necessary to consider the ‘specific direction’ of the acts of the accused in a situation when he was in the field, aware of the crimes and in command of the unit that took part in them. ‘Physical proximity’ doesn’t mean that the person aiding the crime should ‘stand by the perpetrator’, as the defense argued, the prosecutor said. What it means is that the person can be on the ground, where the crimes are being committed, and that he is part of the same military structure as those who organize and commit the crimes.

The prosecutor also rejected the argument that Pandurevic didn’t have effective control over his soldiers because he was too busy fighting. The claim ‘renders the entire concept of international law pointless’, said the prosecutor. A commander must place the prevention of crimes before the success of military actions, not vice versa. As for Pandurevic, the prosecutor noted, all he had to do was issue ‘a single’ order to his troops instructing them to investigate the mass executions of the Srebrenica prisoners. He did not do it. The prosecutor also rejected the defense’s argument that only a small number of the Zvornik Brigade soldiers participated in the murder operation. The unit played a ‘central and key role’ in the killings and a large number of soldiers, military police, chiefs of staff and security chiefs were involved, prosecutor Kyle Wood said.

According to the prosecution, all the defense grounds of appeal should be rejected by the judges and Pandurevic’s sentence should be increased. The prosecution will present additional arguments next week during its oral presentation.

At the end of the oral arguments, Pandurevic’s defense counsel announced that he would soon file a motion for his client’s release pending the delivery of the appellate judgment. Pandurevic has already served two thirds of his 13-year sentence. In line with the practice at the Tribunal, the convicts are granted early release after serving two thirds of their sentence.