After 13 months of deliberations, the Tribunal’s appellate judges have rendered the final judgment in the case against five Republika Srpska military officers. The Trial Chamber found the accused guilty of the crimes in Srebrenica and Zepa in July 1995. This is the first final judgment for genocide 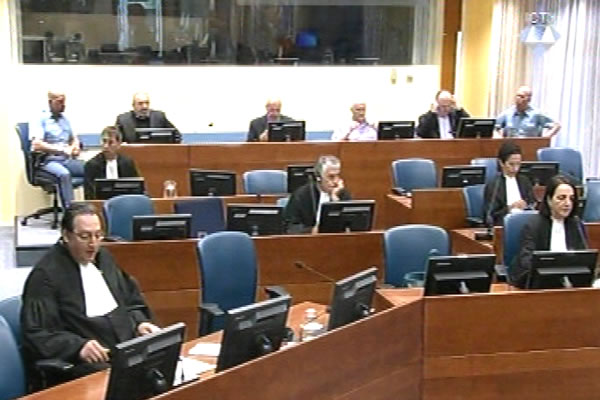 Judge Patrick Robinson took two hours to read out the summary of the judgment of the VRS officers indicted for the crimes in Srebrenica and Zepa in 1995. The appellate judgment confirmed that genocide was committed in Srebrenica in 1995. All factual findings in the trial judgment rendered in 2010 were confirmed although the legal qualifications of the particular charges against the five former VRS officers have been modified. These modifications and the grounds of appeal of the appellants and the prosecution that have been granted did not have any significant impact on the sentences.

The Appeals Chamber reduced Radivoj Miletic’s 19-year sentence to 18 years in prison. Apart from that, the sentences of all the other accused have been confirmed: Vujadin Popovic and Ljubisa Beara get life, Drago Nikolic 35 years in prison and Vinko Pandurevic 13 years in prison.

Popovic, Beara and Drago Nikolic, former Zvornik Brigade chief of security, have been acquitted of genocide and aiding and abetting genocide in the part of the indictment pertaining to the murder of six men near the village of Trnovo in late July 1995. The Appeals Chamber found that the perpetrators of that crime – the members of the Serbian State Security Special Unit, also known as the Scorpions unit, couldn’t be linked with the joint criminal enterprise Popovic, Nikolic and Beara are charged with. This finding acquitted the three officers of the Scorpions’ crime.

The Appeals Chamber has granted the appeals of the prosecution regarding Vinko Pandurevic, former commander of the Zvornik Brigade, by convicting him of crimes against humanity and aiding and abetting murder as violations of laws and customs of war. However, Pandurevic didn’t receive a harsher sentence sought by the prosecution. In the summary judgment, the Appeals Chamber stressed Pandurevic’s contribution to ‘saving thousands of Bosnian Muslims’. Pandurevic contravened his superiors’ orders and opened a corridor allowing a part of the column of soldiers and civilians from Srebrenica to pass on their way to Tuzla. Also, Pandurevic sent about 15 prisoners to the Batkovic prison camp instead to the execution site.

The Appeals Chamber reduced the sentence of Radivoje Miletic, former chief of operations in the Main Staff, by one year granting in part some of Miletic’s grounds of appeal. Miletic had asked for a milder sentence in his appeal.

The appellate judgment has put an end to one of the biggest and most complex trials at the Tribunal. There were seven accused in the dock when the trial began in August 2006. The trial judgment was rendered in June 2010. Ljubomir Borovcanin, commander of the police units that took part in the VRS Srebrenica Operation, was sentenced to 17 years and didn’t appeal against his sentence. Milan Gvero, assistant to the commander of the VRS Main Staff for morale and religion, was sentenced to five years but passed away during the appellate proceedings.