A regional conference will be held on 26 and 27 November 2013 in Sarajevo to mark the 20th anniversary of the Tribunal in The Hague. Representatives of the victims’ associations from BH have talked to the Tribunal’s President and the Chief Prosecutor 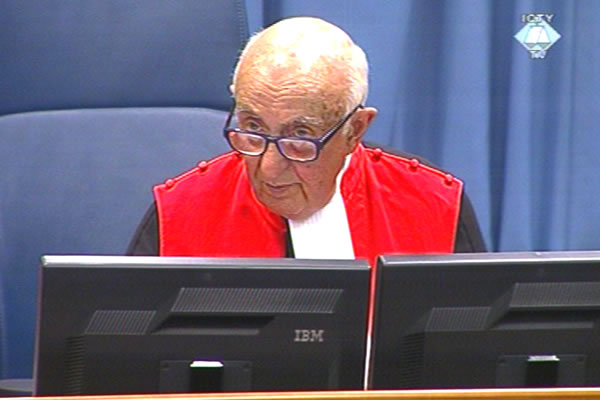 Theodor Meron, president of the Tribunal

Judge Theodor Meron will begin his third tenure as the Tribunal’s President with a visit to the region. Meron will be in Sarajevo to attend a regional conference on 26 and 27 November 2014 to mark the 20th anniversary of the International Criminal Tribunal for the former Yugoslavia.

Magdalena Spalinska, the Tribunal’s spokesperson, announced at the press conference that there would be about 200 participants at the Sarajevo conference, mostly from the former Yugoslavia. The discussions will include the Tribunal’s accomplishments and challenges, the reparations, the protection of witnesses and victims and access to the archives. Spalinska also indicated that President Meron would meet the representatives of the victims’ organizations in the region.

Before the Sarajevo conference, a delegation of the victims’ associations from Bosnia and Herzegovina visited the Tribunal. Kada Hotic, Murat Tahirovic, and Satko Mujagic – members of the delegation – were received by President Meron and Chief Prosecutor Serge Brammertz. Mujagic invited Judge Meron to come to Prijedor and visit Omarska before travelling to Sarajevo. Mujagic, who was held in Omarska, urged the President to join the ‘initiative to memorialize the past’. Mujagic invited Judge Meron to visit a recently discovered mass grave in Tomasica and smell the ‘scent of genocide’. Mujagic felt that the President was ‘willing to do it’.

The mass grave in Tomasica has surrendered new evidence of the crimes in the Prijedor area. As Tahirovic said, Chief Prosecutor Brammertz assured him that the OTP teams working on the cases against Karadzic and Mladic are examining the evidence in order to tender it at the trials of the former Bosnian Serb leaders.

Finally, Kada Hotic of the Association of the Mothers of Srebrenica and Zepa has told us that she informed President Meron of the initiative to erect two pillars: a pillory and a pillar of honor in the Memorial Center in Potocari. It was up to President Meron, Hotic said, to decide ‘which of those two columns he would grace’.