At the forthcoming elections, the incumbents, President Meron and Vice-president Agius, will be challenged by the Kwon and Orie ticket. All four are among the most experienced judges and in normal circumstances, it would not matter which one of them is the “first among equals” 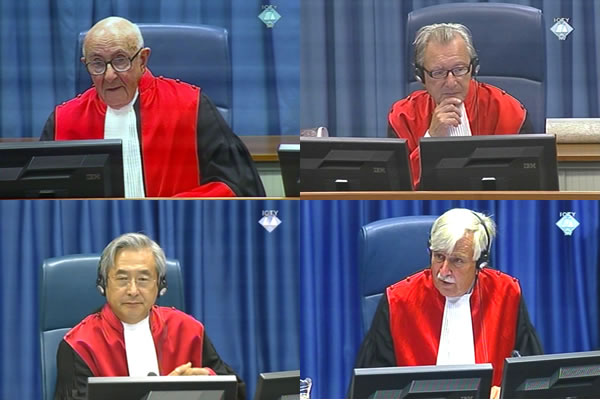 At a plenary meeting on Tuesday, 1 October 2013, the Tribunal’s permanent judges will elect the new, and most likely the last ICTY president. The first president, Italian judge Cassese, was appointed in November 1993 and was followed by the US judge McDonald, French judge Jorda, US judge Meron, Italian judge Pocar, Jamaican judge Robinson, and finally, by Judge Meron again.

For the first time in the Tribunal’s history at their plenary meeting the judges will have two presidential tickets before them. The first bears the names of the incumbents, President Meron and Vice-President Agius, who are seeking re-election. Standing against them are judges Kwon and Orie, the presiding judges in the Trial Chambers hearing the cases of Radovan Karadzic and Ratko Mladic respectively.

All four judges are undoubtedly among the most experienced and eminent judges at the Tribunal. Under normal circumstances it wouldn’t matter which one of them is the ‘first among equals’. Unfortunately, the current circumstances can hardly be described as ‘normal’. But, let us first introduce the ‘big four’.

After a long career as a diplomat in Israel and as a law professor in the United States, judge Meron joined the Tribunal in 2001, from a post of an adviser in the State Department. On the Tribunal’s website, Judge Meron is described as a ‘leading scholar of international humanitarian law, human rights, and international criminal law’. As soon as he arrived in The Hague, Meron was appointed to the Appeals Chamber; he has not been involved in any first-instance proceedings in the 12 years of his career at the Tribunal.

Judge Meron was first elected as the Tribunal’s president in 2003 and was re-elected in 2011. At the Tribunal, his second term has been labeled as ‘Meron’s trilogy’. The Appeals Chambers in which he served as the presiding judge in The Hague and Arusha quashed three trial judgments of five high-ranking military and political officials (Gotovina, Markac, Mugenizi, Muginareza and Perisic). The accused were previously sentenced to a total of 129 years for serious violations of international humanitarian law in the former Yugoslavia and Rwanda.

A lot has been written about those judgments and their consequences not only in the region and for the victims but also for the development of international criminal law; we will not belabor the point. Let us only recall that in their dissenting opinions the judges in the same Appeals Chambers qualified those judgments as ‘simply grotesque’ and ‘deprived of any sense of justice’. At the Tribunal, the judgments are ironically called ‘magazine judgments’ because they are so thin, both in volume (about 50 pages each) and in legal reasoning.

In addition to this 'trilogy', the balance sheet of the current presidency includes the drastic slump in the staff morale, as shown by a recent poll among the legal officers assisting the trial and appeals chambers. Finally, although they have recused themselves from ruling on Judge Harhoff’s fate, the current president and vice-president cannot be exempted from responsibility for the chaos engendered by the way in which the case has been dealt with, in light of the powers they so demonstrably wield. All in all, the balance sheet of the incumbents ‘speaks for itself’, to apply the phrase Judge Meron likes to use when he talks about his judgments.

Vice-president Agius also joined the Tribunal in 2001. Before his appointment to the Appeals Chamber in 2010, the Maltese judge presided over the Trial Chambers hearing the cases against Radoslav Brdjanin, Naser Oric and the seven Bosnian Serb military and police officers who were tried for the Srebrenica genocide. Interestingly, when Gotovina and Markac were acquitted on appeal, Judge Agius worded his dissenting opinion quite harshly, distancing himself from the majority decision whose analysis was, in his view, ‘confusing and extremely problematic’. However, when the next case came up on appeal, Judge Agius agreed with the majority headed by Judge Meron and General Perisic was acquitted.

At the upcoming presidential elections, Judge Kwon from South Korea tops the challengers’ ticket. Judge Kwon was also first appointed a judge at the Tribunal in 2001. He was on the Trial Chamber in the unfinished case against Slobodan Milosevic. He also sat on the bench at the ‘mega-trial’ of the seven officers charged with genocide in Srebrenica. From 2008 to 2011, Judge Kwon served as the Tribunal’s Vice-President. In the past four years judge Kwon has been the presiding judge of the Chamber hearing the case against former Republika Srpska president Radovan Karadzic. The youngest of the four candidates, Judge Kwon is considered an acolyte and follower of the Tribunal’s first president, judge Cassese.

Orie, who is Dutch, was appointed judge in 2001, but his experience at the Tribunal is longer and more diverse. In 1996, Orie was on the defense team of Dusko Tadic, in the first trial before the Tribunal. Later, when he joined the Chambers, Orie was the presiding judge in the Trial Chambers hearing the cases against Galic, Krajisnik, Haradinaj, generals Gotovina, Markac and Cermak, and the Serbian secret service chiefs Stanisic and Simatovic. Judge Orie is now the presiding judge at the trial of Ratko Mladic, former commander of the VRS Main Staff.

It must be noted that Judge Orie is not exactly the Appeals Chamber’s blue-eyed boy. The sentences imposed by his Trial Chambers were drastically changed in two cases on appeal. Galic’s 20-year sentence was changed to a life imprisonment while Krajisnik got 20 years in prison instead of 27. Two of Judge Orie’s judgments were reversed. The Trial Chamber had convicted Gotovina and Markac, only for them to be acquitted on appeal while Haradinaj, who was acquitted by Judge Orie and his colleagues, was retried. In Haradinaj’s case, Judge Orie was vindicated because the new Trial Chamber also acquitted Haradinaj after a re-trial. It remains to be seen what will happen with the acquittal of Stanisic and Simatovic.

This concludes our presentation of the tickets for the upcoming presidential elections, seen by many, at the Tribunal and elsewhere, as the most important elections in the two decades of the Tribunal’s history. As our pre-election special continues, we will analyze the prospects of the four candidates as they face the vote at the plenary meeting, and the factors that may influence the outcome.