Judge Liu’s Appeals Chamber confirmed the findings of the trial judgment on the existence of a joint criminal enterprise aimed at the permanent removal of Albanian civilians from Kosovo in 1999. The sentences of three of the four former Serbian officials were slightly reduced nevertheless. The judges did not accept the conclusion of Judge Meron’s Appeals Chamber in the case against Momcilo Perisic that the ‘specific direction’ was an element of the aiding and abetting mode of liability 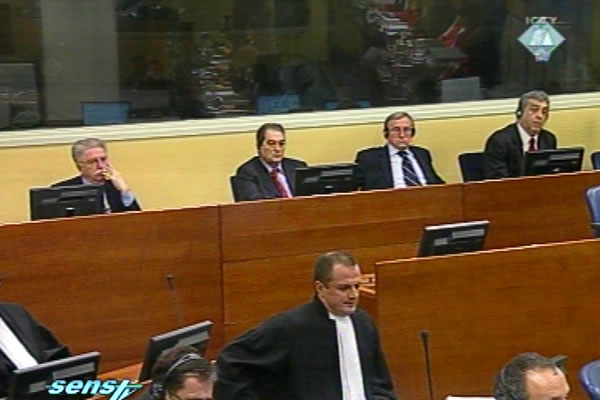 The final judgment for the former Serbian political, military and police officials – Nikola Sainovic, Nebojsa Pavkovic, Sreten Lukic and Vladimir Lazarevic – today confirmed the finding of the Trial Chamber that in 1999 there was a joint criminal enterprise aimed at expelling the Albanian population from Kosovo, which was a Serbian province at the time. The appellate judges found that the responsibility of the three of the four accused was slightly diminished, and their sentences were reduced by one to four years.

The appellate judgment confirmed the involvement of former deputy prime minister Nikola Sainovic, former commander of the VJ 3rd Army Nebojsa Pavkovic and former commander of the Serbian MUP for Kosovo Sreten Lukic in the joint criminal enterprise. The Appeals Chamber also upheld the conclusion that Vladimir Lazarevic, former commander of the Pristina Corps, aided and abetted the enterprise headed by Slobodan Milosevic. The Trial Chamber sentenced the first three accused to 22 years each while Lazarevic got 15 years in prison. In the appellate proceedings, only Pavkovic’s sentence was confirmed. Sainovic’s sentence was reduced to 18, Lukic’s to 20 and Lazarevic’s to 14 years in prison.

The Appeals Chamber reduced the sentences because it has granted some of the grounds of appeal presented by the accused that related to murder. Although the appellate judges upheld the conclusion that the murders of Kosovo Albanians were a natural and foreseeable result of the joint criminal enterprise, they ruled that the accused didn’t have reason to know about them and were consequently not responsible for some of them. The trial judgment notes that at least 600 persons were killed in the terror campaign against the Kosovo civilians. In the appellate judgment, the 274 victims killed in Meja and Korenica were subtracted from the total. There was no evidence that all of them were civilians, the appellate judges stressed. The final judgment confirmed the Trial Chamber’s conclusion that at least 700,000 Albanian civilians were expelled from Kosovo in 1999.

Also, several of the prosecution’s grounds of appeal were granted. The most important of them relates to sexual assaults in Pristina, Beleg and Cirez. The prosecution appealed against the Trial Chamber’s finding that those crimes were not an element of persecution. Although this ground of appeal was granted, the judges decided not to impose new sentences, with Judge Ramarosson dissenting. Judges Liu and Tuzmukhamedov also appended their partially dissenting opinions pertaining to parts of the judgment.

The part of the judgment related to the ‘specific direction’ as an element of the aiding and abetting as a mode of liability was particularly interesting. Lazarevic's appeal was based on this doctrine. The Appeals Chamber ruled that this doctrine, first laid out in the final judgment in which the Appeals Chamber with Judge Theodor Meron presiding acquitted the Serbian general Momcilo Perisic of the crimes in BH, ran counter to the Tribunal’s jurisprudence. The finding was inconsistent with the judgments handed down to Sljivancanin and Mrksic for the crimes in Vukovar, and to Milan and Sredoje Lukic for the murders in Visegrad. The judgment rendered today openly dismissed the finding of Meron’s Appeals Chamber that the ‘specific direction’ of the accused to the commission of a crime was a ‘necessary element’ for a conviction of aiding and abetting. The finding, the appellate judgment notes, is in ‘direct and material conflict with the prevailing jurisprudence and the customary international law in this regard’.

Six former Serbian officials were charged with crimes against Kosovo Albanians in the indictment. Former Serbian president Milan Milutinovic was acquitted of all charges in the trial. Former chief of the VJ Main Staff Dragoljub Ojdanic accepted the findings of the trial chamber and was released after serving two thirds of his 15-year sentence.

The Tribunal’s trials for the Kosovo crimes will be concluded on Monday, 27 January 2014, with the appellate judgment of the former chief of the Serbian MUP Public Security Department Vlastimir Djordjevic.