At the appellate hearing, the defense of police General Vlastimir Djordjevic tried to convince the judges that his role in the crimes against Kosovo Albanians was ‘exaggerated’. The prosecution claimed that the Trial Chamber didn’t err when it identified Djordjevic as a key participant in the joint criminal enterprise. The defense called for Djordjevic’s acquittal or a milder sentence while the prosecution urged the judges to sentence him to life for his crimes 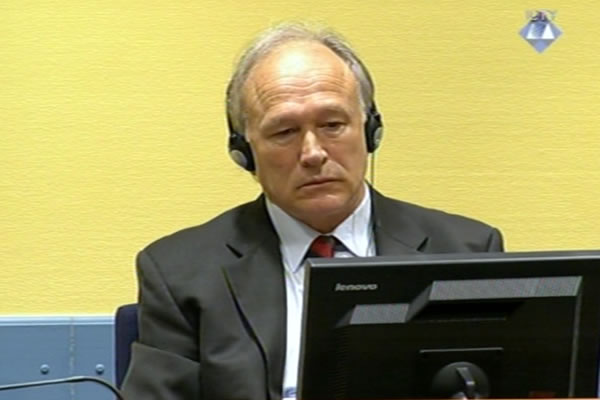 General Vlastimir Djordjevic’s defense contends that the trial judgment ‘exaggerated’ his role in the crimes against Kosovo Albanians. The 27-year sentence Djordjevic received is too harsh, the defense claimed. At the appellate hearing today, defense counsel Veljko Djuric said that at worst the accused was a ‘man who did too little, not a man with a criminal intent’.

The defense tried to shift the blame for the police crimes in Kosovo in 1999 on the interior minister Vlajko Stojiljkovic, special police units’ commander Obrad Stevanovic and the Chief of Staff for Kosovo Sreten Lukic. The defense argued that the accused was ‘just an assistant minister’ and that his role in the Kosovo operations was ‘small; he was a bit player’.

Djordjevic doesn’t deny that he took part in the operation to cover up the crimes when the bodies of Albanian civilians were moved from Kosovo to Serbia. Djordjevic noted that in a special brief he submitted during the appellate proceedings. Djordjevic’s defense contends that Djordjevic was ‘drawn into’ that ‘panicked and rash action’. Djordjevic cannot be blamed for the murder of the people whose bodies he later helped transfer, his defense argued: he should be acquitted of all charges or, alternatively, should be given a substantially milder sentence that would adequately reflect his ‘minor role’.

Today the defense invoked General Momcilo Perisic’s judgment. Perisic was acquitted because the Appeals Chamber ruled that the assistance he had provided to the other armies wasn’t ‘specifically directed’ at the crimes those armies had committed. The defense counsels noted that Djordjevic, like Perisic, only helped the police in Kosovo from afar, from Belgrade. There is no ‘specific direction’ to the commission of the crimes against Kosovo Albanians, the defense argued. Djordjevic is not the first accused to try to exploit the findings of the Appeals Chamber in the Perisic case. VJ general Vladimir Lazarevic made a similar bid at the appellate hearing in the case against the four former Serb officials who were also indicted for the crimes in Kosovo. The prosecution’s response was virtually the same: first, Perisic’s judgment runs counter to international case law and the Tribunal’s jurisprudence and should therefore not be adhered to. Second, even if the standard of ‘specific direction’ is to be accepted, it couldn’t be applied to Djordjevic and Lazarevic, as, according to the prosecution, they didn’t ‘aid and abet from a distance’. In fact, they were part of the police and military structures responsible for the crimes.

The prosecutor claimed that the Trial Chamber didn’t err when it identified Djordjevic as one the key members of the joint criminal enterprise aimed at eliminating the Albanian population from Kosovo and at establishing the Serb dominance in what was a Serbian province at the time. As the chief of the Public Security Department, Djordjevic had jurisdiction over the police units in Kosovo and over the paramilitary units such as the Scorpions, the prosecutor noted. Djordjevic was the mastermind, not a bit player in the operation to transfer the bodies to Serbia. The prosecution asked the judges to deny Djordjevic’s appeal, to confirm the trial judgment and increase the original 27-year sentence to a life sentence.

At the end of the hearing, Djordjevic addressed the Appeals Chamber, apologizing to the Kosovo victims and expressing his regret for his failure to do something when he learned about the secret operation to transport the bodies from Kosovo to Serbia and bury them in mass graves in Batajnica and at other locations.