ARKAN ‘WAS SUBORDINATED TO JNA AT SOME POINTS IN TIME’

In his cross-examination at the trial of Goran Hadzic, the military and intelligence analyst Reynaud Theunens couldn’t precisely tell under whose command Arkan was from 1 August 1991 on. Theunens agreed in part with the defense counsel’s suggestion that at various times, Arkan participated in combat operations under the JNA command. On the other hand, Theunens didn’t offer an alternative answer as to under whose command Arkan was in other situations 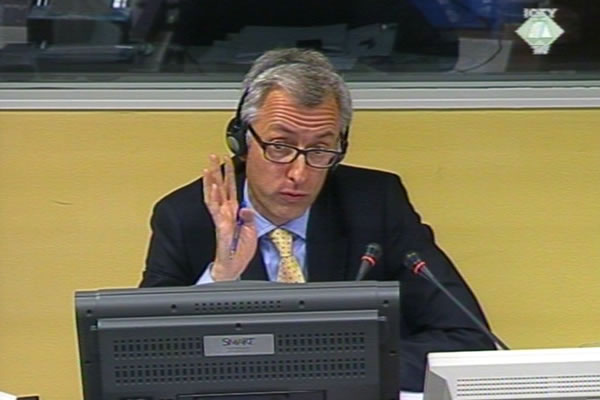 For the most part of the cross-examination of the military and intelligence analyst Reynaud Theunens, Hadzic’s defense counsel strove to establish under whose command Zeljko Raznatovic Arkan was in the combat operations in 1991. As alleged in the indictment, the former prime minister of the Serb Autonomous Region Slavonia, Baranja and Western Srem (SBZS) and former president of the Republic of Serbian Krajina is responsible for the crimes of Arkan’s men in Eastern Slavonia. The defense counsel suggested that from his arrival in Eastern Slavonia in August 1991 until the deployment of UNPROFOR in 1992, Arkan was subordinated to the JNA.

Based on the orders of the Novi Sad Corps, Theunens established that during the battle for the village of Luzac in November 1991 and later on, in December 1991 and January 1992, Arkan and Arkan’s men were ‘under the JNA command’. Theunens nevertheless claimed that various reports from the security officers in the First Military District from October 1991 on indicated that Arkan wasn't subordinated to the JNA ‘at all times’. ‘Even when he was supposed to be subordinated to the Army, Arkan often acted independently’. He could get away with it because he was ‘well- connected’ with the officials of the SAO SBZS and the Serbian government, Theunens noted. Theunens finally confirmed that, according to his findings, Arkan ‘was subordinated to the JNA at some points in time, while at other times he wasn’t’.

The fact that there is no mention of Arkan in some JNA documents from the summer of 1991 "points to the conclusion" that in August 1991, Arkan wasn’t subordinated to the Novi Sad Corps, Theunens said. However, according to a memo sent to the Security Administration of the Federal Secretariat for National Defense, Arkan was actively involved in the capture of Erdut in August 1991. Theunens agreed that in terms of doctrine, Arkan had to be subordinated to the JNA. However, ‘looking at the context, the situation wasn’t exactly clear’, Theunens said.

The defense counsel put it to the witness that the JNA documents could have been forged. Theunens replied that there were documents from the Second Military District whose authenticity was suspicious, but various officers of the former JNA confirmed that they had originated from the Yugoslav Army. The defense counsel claimed that the Guards Brigade log from the time of the JNA Vukovar operation didn’t contain important information such as the agreement on the evacuation of the Vukovar Hospital on 20 November 1991. Theunens blamed it on ‘the officers’ sloppiness’, not the effort on the part of the JNA to avoid responsibility for the murder of more than 200 men at the Ovcara farm. Theunens will continue his evidence on Monday.