A protected prosecution witness described at the trial of Goran Hadzic how he and other detainees, mostly from Eastern Slavonia, were held in inhumane conditions in the Begejci prison camp near Zrenjanin. The prisoners were beaten by the guards wearing JNA uniforms 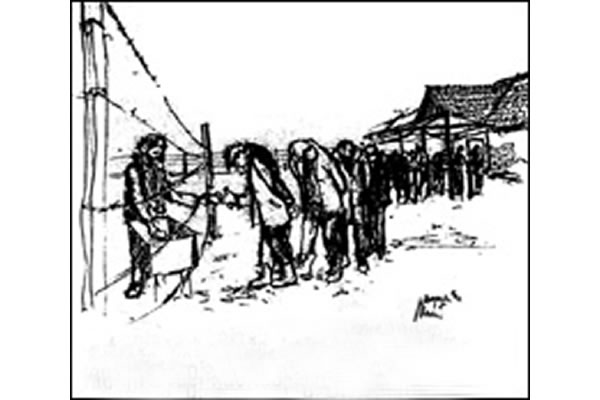 Drawing of the Begejci camp in Vojvodina

The Begejci prison camp near Zrenjanin is one of the 13 prison facilities, five of which are located in Serbia, listed in the indictment against former Krajina Serb leader Goran Hadzic. A protected prosecution witness testified today about his detention in Begejci. He testified with image distortion protected by pseudonym GH-071.

The witness is a Croat; he lived in Novi Sad before the war. In November 1991, he was arrested in Vrbas as he tried to organize a presentation for the cosmetics range he was selling. Based on what the witness testified, he was arrested because he was part of the local ‘civilian defense’ watch in the town of Suhopolje near Virovitica during the blockade of the JNA military barracks. He was arrested by the Serbian police and after a brief interrogation he was taken to a military barracks in Paragovo, a neighborhood in Novi Sad. The witness was again interrogated there. Two days later, the witness was transferred to the prison camp at the Begejci farm, near Zrenjanin.

The witness was detained in a large barn with about 300 other detainees, mostly from Eastern Slavonia. As soon as he got there, he was beaten, and was then interrogated, again with abuse. He soon realized that this standard procedure. After the fall of Vukovar the number of prisoners rose to about 500. All the prisoners, except for about 20 members of the Croatian National Guard (ZNG), were civilians. About twenty of them were women. As the witness said, some of the detainees were Serb draft dodgers. There were two students from Sri Lanka who also suffered abuse. According to the witness, the prison camp was under the JNA jurisdiction and guards wore the white belts usually worn by the military police. The witness didn’t know their names but remembered their nicknames: Zile, Borko, Voja, Rambo. In his opinion, the guards were criminals who had been released from prison and drafted into the JNA reserve.

After the ‘inaugural’ beating, the witness was beaten several times but he fared better than some other detainees: one of them died before the witness after the beating. Another detainee suffered severe injuries to his arms because he was left hanging by his wrists for two days. ZNG soldiers came to Begejci with dog bites from their detention in Beli Manastir.

In December 1991, the witness was transferred to Zagreb as part of a large-scale exchange of about 600 Croats from Begejci and other prison camps in Serbia. As the witness recounted, for some time after his return from the prison camp he continued to feel the physical consequences of his captivity. The mental trauma is permanent, the witness said, adding that to this day, ‘I am not the man I once was’.

In a brief cross-examination, Hadzic’s defense counsel Zoran Zivanovic left most of the witness’s claims unchallenged. Instead, he asked the witness why none of the detainees complained about the bad conditions and regular beatings to the JNA officers and Major Miroslav Zivanovic, who was in charge of the prison camp, according to the witness. ‘We couldn’t do it, and there was no point’, the witness replied.

Goran Hadzic’s trial continues tomorrow with the evidence of a new prosecution witness.