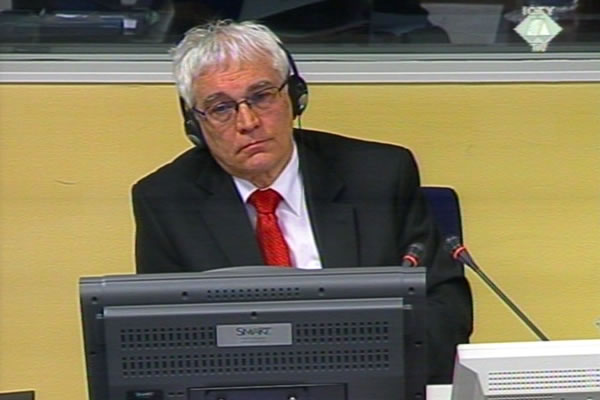 In 1991 Petr Kypr, a diplomat from the Czech Republic, was a member of the European Community Monitoring Mission. In that capacity, Kypr observed and regularly visited eastern Croatia. Former Krajina Serb leader Goran Hadzic is charged with crimes perpetrated in that area. Kypr already testified about his visits to Ilok, Lovas, Vukovar and other places in the region at the trial of JNA officers Mrksic, Sljivancanin and Radic. Today, the transcript of Kypr’s evidence was admitted into evidence at Hadzic’s trial. The witness also presented some of his other recollections relevant for the prosecution’s case.

In October 1991, Ambassador Kypr monitored the evacuation of villagers from Ilok. The evacuation was conducted in line with an agreement between the JNA and the Croatian authorities. The exodus was ‘quiet and sad’, the witness recounted: people left ‘without saying anything, with tears in their eyes’, on tractors and in their own cars. A while later, the witness visited Lovas with his colleagues from the monitoring mission, although the JNA refused to guarantee his safety. Kypr was told that Croatian paramilitary units were there but the only troops he saw were Serb irregulars. Until the end of 1991, Kypr visited other places such as the village of Berak, where he saw 50 Croats detained in a house. This was in December 1991. The detainees were aged from 55 to 88 and were held there by the Serb authorities on suspicion of supporting the ‘Croatian terrorists’.

In his previous testimony before the Tribunal, Kypr explained in more detail that the JNA in 1991 tried to remove as many Croats as possible from Eastern Slavonia, working side by side with the Serb paramilitaries. Croatian towns and villages were first shelled, then the JNA and the paramilitaries would enter the settlements, abusing, detaining and killing civilians, whose property was looted and destroyed.

The most important operation the witness was involved in was the evacuation of the people from Vukovar after the Serb forces took the town in November 1991. A few days before the evacuation started, on 20 November 1991, the witness met with the JNA officers in Negoslavci. Nebojsa Pavkovic, the commander of the Operational Zone South, told Kypr that the agreement with the Croatian authorities would not be honored: some of the prisoners from the Vukovar Hospital would not be evacuated, but would be detained and exchanged later.

The defense tried to shift the blame for the events in Vukovar and other places in Eastern Croatia on the JNA, denying that Hadzic’s civilian authorities had any part in the crimes. Kypr could only confirm that his team communicated just with the JNA which controlled the area. Kypr didn’t know what role the civilian authorities had. He did recall that when he went to Velepromet in Vukovar, where Croatian prisoners were detained, he talked to some Serbs in civilian clothes. They might have been representatives of the local authorities, Kypr said.

Goran Hadzic’s trial for the crimes against non-Serbs in Eastern Slavonia, Baranja and Western Srem continues on Tuesday.