Prosecution expert Visnja Bilic presented the data about the missing, exhumed and identified victims of the crimes in Eastern Slavonia that Goran Hadzic is charged with. Dr Hicham Malla began his evidence today. In November 1991, Dr Malla was detained in the Stajicevo prison camp in Serbia 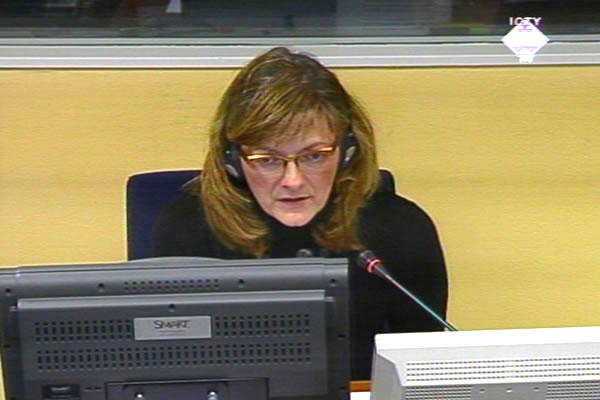 Psychologist Visnja Bilic drafted an expert report for the prosecution in the case against Goran Hadzic. In her report, Bilic presented data about the missing, exhumed, identified and detained persons registered in the Administration for Detainees and Missing Persons, which is part of the Croatian Ministry of Veterans’ Affairs.

According to the Administration’s data, 984 persons, mostly Croats, are still registered as missing. Most of them disappeared in late 1991 or early 1992. The Administration for Detainees and Missing Persons also reported that 3,832 bodies were exhumed from various graves. Of the 3,275 persons whose remains were identified, 2,016 were civilians. The bodies were exhumed from the mass graves at Ovcara, Celije and Dalj, from a well in Daljski Atar and from the Novo Groblje cemetery in Vukovar, which was the secondary mass grave for the victims killed in the Velepromet warehouse, at Trpinjska Road and other places around Vukovar. The witness also spoke about the victims from Borovo Selo who were buried in Novi Sad in Serbia after their bodies were found floating in the Danube.

A part of the analysis focused on the Croatian citizens detained in the prison camps and prisons in the territory of the FR Yugoslavia, Bosnia and Herzegovina and in the ‘occupied’ Croatian areas. According to the data, there were 7,666 detained persons: 1,865 were determined to be civilians, while the status of more than 3,600 persons remains unknown.

In the cross-examination, the defense counsel tried to contest the authenticity of the missing person questionnaire the witness had made. He put it to the witness that one person was registered as missing since 1991, although medical records indicate that in 1993 that person was treated in the Osijek Hospital. The witness said that the family member who provided the information in that case got ‘confused’. In another example, a victim was not identified until 15 years after the exhumation. Bilic explained that the remains were ‘processed’ immediately, but as the person didn’t have any biological descendants the specimens could not be compared with the samples taken from the family before they were finally located, 15 years later. In the third case, a person was seen alive after the date on which he was registered missing. The witness replied that in ‘most cases’ it turned out that the ‘reports on subsequent sightings were not correct’.

After Visnja Bilic completed her evidence the prosecution called Dr Hicham Malla. On 19 November 1991, Dr Malla was taken out of the shelter in the Borovo factory and brought to the detention facility in the Stajicevo farm in Serbia. Dr Malla had graduated from the medical school in Zagreb and never returned to his homeland, Syria: he got married to a local and remained in Croatia. Dr Malla’s wife was killed by a shell on 8 November 1991, as the two of them were trying to aid the wounded in front of the shelter in the Borovo factory. The witness was seriously injured: he was hit by 43 shrapnel. Dr Malla will continue his evidence tomorrow.