BUTLER: TOLIMIR ‘KNEW OR COULD HAVE KNOWN’ ABOUT CRIMES

Prosecution expert witness completed his marathon evidence at the trial of Zdravko Tolimir, concluding that Mladic’s assistant for security knew or could have known about the crimes he is charged with 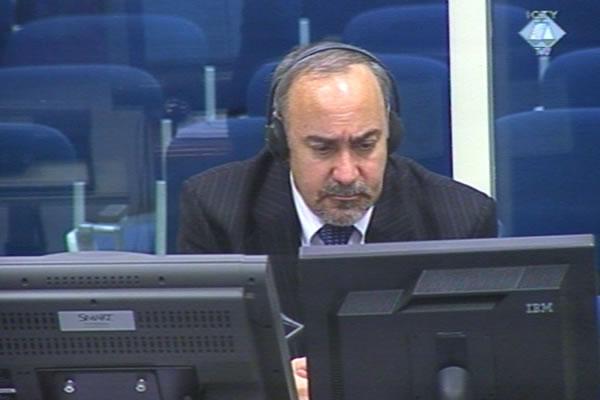 ‘The fact that you were not physically present in the [VRS] Main Staff doesn’t mean that you didn’t know about the events in the battle field or that you were not able to issue orders’, US military analyst Richard Butler told General Zdravko Tolimir as his cross-examination continued. Mladic’s assistant for security and intelligence is charged with genocide and other crimes in Srebrenica and Zepa.

In the final part of the cross-examination of the prosecution expert witness, Tolimir insisted that he didn’t know and couldn’t have known about the mass execution of Bosniaks captured after the fall of Srebrenica because he was not in the Main Staff. As Tolimir said, he was in the field, involved in an operation in the Zepa area. Tolimir showed Butler a series of documents that in his view corroborate his claim. One of the documents was a report written by Colonel Jankovic, an intelligence officer in the Main Staff, on ‘the completion of the evacuation from Potocari’. ‘If we want to conquer Zepa and Gorazde the same way’, Jankovic suggested, it would be good to put a positive spin on the evacuation from Potocari in the media and highlight the fact that the safe passage was offered not only to civilians but also to men of military age.

According to Tolimir, this report showed, contrary to the prosecutor’s claims, that on 12 July 1995, there was no plan to kill the prisoners, because Colonel Jankovic would surely have known about it on 13 July 1995. Butler however dismissed the suggestion. According to Butler, Jankovic’s report shows that he was in a position to know about the plan because he was in Bratunac at the time. Instead of reflecting the real situation in the field, the report describes how the situation was to be presented in the media, Butler noted.

In the re-examination, prosecutor Peter McCloskey turned once more to the question if general Tolimir knew or could have known in July 1995 about the crimes committed after the fall of Srebrenica. The prosecutor showed the expert witness a conversation intercepted on 15 July 1995, in which the security chief in the VRS Main Staff Ljubisa Beara asks General Krstic, the Drina Corps commander, for reinforcements to complete a mission which was part of the Srebrenica operation. At the time, General Krstic was at the Drina Corps forward command post, but was involved in the Zepa operation just like Tolimir. General Tolimir was able to communicate with the Main Staff and other VRS units just as Krstic was, Butler stressed. Butler concluded that the accused general could have known about the events following the fall of Srebrenica.