WHAT DID GENERAL KNOW?

In the final part of his cross-examination of US military analyst Richard Butler, the accused Zdravko Tolimir denied his role in the ‘joint criminal enterprise to kill men of military age’ captured after the fall of Srebrenica. The accused general claims he didn’t know about the executions when they were carried out, from 13 to 17 July 1995; he remained unaware of them for some time afterwards 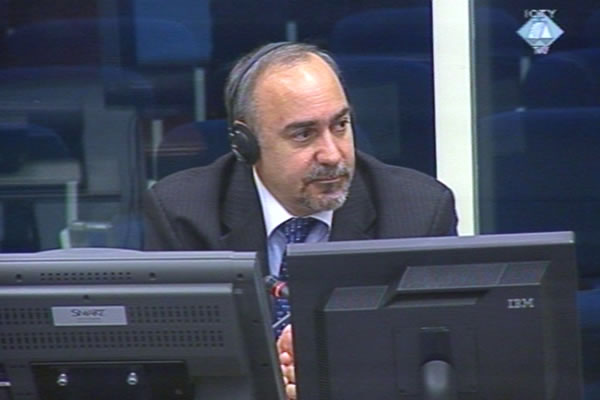 The accused general showed the prosecution expert various documents and witness statements. In Tolimir’s view, the documents proved that he didn’t know about the execution plan. Butler begged to differ. ‘You don’t have to be a genius to conclude’ that Mladic’s assistant for security and intelligence in the Main Staff had to know about those plans in light of his position, the scale of the crime and the number of people involved, the expert said.

Tolimir claims he was not in the Main Staff when mass executions were carried out, adding that his subordinates didn’t send him any reports from which he could conclude that crimes had been committed. The US military and intelligence analyst found it difficult to believe that on his return to the Main Staff Tolimir didn’t get detailed reports about the developments in the field.

In a bid to prove that he didn’t know about the plan to execute the prisoners, Tolimir referred to a cable he sent to the Main Staff in the evening of 13 July 1995. In it Tolimir suggested various locations where ‘800 prisoners’ could be accommodated. Butler later used the same cable to stress that this was clear evidence that on 13 July 1995 Tolimir ‘knew about those 800 prisoners’. It is unusual that Tolimir never asked himself what had happened with those prisoners ‘at least out of professional curiosity’, Butler said.

In addition to claiming that he was not part of the military circles that planned and organized the mass execution, Tolimir said that on 13 July 1995, after the meeting between Beara, security officer in the Main Staff, and Miroslav Deronjic, Karadzic’s civil affairs commissioner in Srebrenica, ‘the prisoners were handed over to the RS civilian authorities’. After the army ‘processed them’, it had nothing to do with them. Momir Nikolic, former security officer in the Bratunac Brigade who pleaded guilty to Srebrenica crimes, said in his evidence that at the meeting Beara asked that the prisoners remain in Bratunac. As Nikolic said, Deronjic insisted that they be transferred to the Zvornik Brigade area of responsibility where mass executions were carried out.

Butler dismissed this suggestion, explaining that the meeting was in no way linked with the transfer of prisoners to the Zvornik area. The first buses towards Zvornik left Bratunac in the afternoon of 13 July 1995 and Beara and Deronjic met later in the evening.

Because tomorrow is a UN holiday, the prosecution expert witness will continue his evidence on Wednesday, when he is expected to complete his marathon evidence which began before the Tribunal’s summer recess. The prosecution should call three more witnesses. As General Tolimir’s defense indicated today, it will not file a Rule 98 bis motion; Tolimir will not petition the Trial Chamber to dismiss the charges not proven by the prosecution after the end of its case.