TOLIMIR’S RESPONSIBILITY FOR PRISONERS OF WAR

American military analyst Richard Butler contends that Zdravko Tolimir as the Assistant Commander for Intelligence and Security in the VRS was responsible for the fate of the prisoners of war executed after the fall of Srebrenica. At first, the accused was unaware of the plan to execute the POWs, but, as Butler contends, Tolimir had to be informed at one point: nobody would risk the failure of the plan because of his ignorance thereof 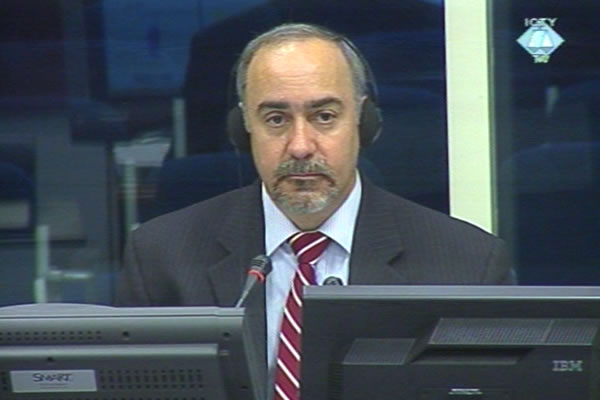 At the trial of General Zdravko Tolimir, Mladic’s former assistant for security and intelligence in the VRS Main Staff, Richard Butler continued his evidence. Butler, who is a military analyst and intelligence officer in the US National Security Agency, drafted a series of reports in which he analyzed the position and role of VRS officers in the Srebrenica operation in the summer of 1995.

At the beginning of his evidence today, Butler said that it was ‘essential’ for the Serb politicians in Bosnia to eliminate the ‘Drina River as a border between two worlds’. This was one of strategic goals formulated at the 16th session of the Bosnian Serb Assembly in May 1992. Although the Drina River valley from Srebrenica to Zvornik was inhabited by a mostly Muslim population, the territory was geographically important for Serbs and represented the ‘basis of the former Serb state’, Butler explained.

As Butler said, Republika Srpska’s laws and regulations called for its personnel to respect laws of war and Geneva Conventions. According to Butler, former JNA officers like Tolimir were taught about laws that apply in armed conflicts. According to the guidelines of the VRS Main Staff of October 1992, crimes against humanity and international law could be punishable by death sentence. Butler confirmed that ‘these crimes are as a rule perpetrated in organized way, through the implementation of a policy set by the leadership during an armed conflict as a part of wider military actions pursuant to the orders of superior officers’. This, the witness contends, is an ‘exact description of the circumstances in Srebrenica’. The Guidelines ‘highlight the responsibility of senior officers to prevent crimes’, the witness confirmed. Butler argued that this regulation could be applied to General Tolimir, who occupied one of the highest posts in the VRS Main Staff during the events in Srebrenica; in fact, all the officers in the intelligence and security service were subordinate to him.

Butler noted that the VRS made ‘minimal efforts to investigate perpetrated crimes’. In the first investigation of the Srebrenica crimes, the Republika Srpska police concluded that ‘victims killed themselves’. The second Srebrenica investigation ‘ended up in a dead-end street’. The investigation was conducted by Colonel Ljubisa Beara who was later sentenced to life for the same crimes in Srebrenica, Butler said.

In the second part of his testimony, Butler said that Tolimir, as the assistant commander for intelligence, was responsible for prisoners of war and for the cover-up of the information about the operation described in the indictment. The goal of that operation was to ‘arrest, transport, murder, bury and re-bury thousands of men of military age in Srebrenica", the prosecutor claims.

According to the document he sent to his subordinate officers on 12 July 1995, Tolimir demanded the ‘arrest of as many members of the routed Muslim groups fleeing from Srebrenica as possible’. Tolimir also demanded that ‘those who resist be liquidated and to make a list of men of military age evacuated from the UN base in Potocari’. When he sent the letter, Tolimir didn’t know that Mladic and his subordinates had agreed to ‘execute everybody they could take out from the mass of people gathered in Potocari’, Butler said. However, Tolimir certainly received information about it later as nobody would risk spoiling the plan because of Tolimir’s ignorance thereof, the witness explained.