HOW THE VRS ‘CROSSED THE LINE’

Isolating the enclaves of Srebrenica and Zepa was a legitimate military target of the VRS. However, the March 1995 Directive 7 of the Supreme Command included an illegitimate objective: to force the civilians from the enclaves to leave, prosecution witness Richard Butler said in his evidence at the trial of Zdravko Tolimir 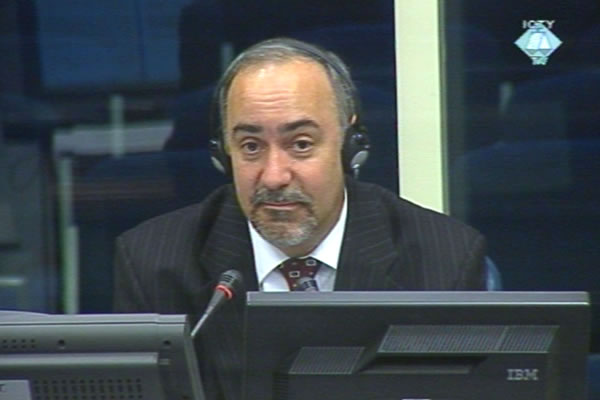 In his analysis, the American military analyst says that before the Bosnian Serbs launched their attacks on Srebrenica and Zepa, they tried to block the routes between the enclaves to prevent the BH Army’s 28th Division from bringing in arms and equipping themselves for the attacks on the VRS positions in the vicinity. Until 2003, the witness was part of the Srebrenica investigation in the Tribunal’s OTP. The aim of the Bosniak forces was to engage as many VRS units as possible to prevent them from being deployed in the Sarajevo theater. The attacks launched by the BH Army 28th Division from the enclaves violated the agreement on protected zones, Butler confirmed, and isolating the two enclaves, Srebrenica and Zepa, was a legitimate military target of the VRS, the US intelligence officer said.

However, in March 1995 the Supreme Command of the Bosnian Serb Army, headed by President Radovan Karadzic issued the so-called Directive 7. Butler contends that the directive included civilians as the targets of the VRS military actions in the eastern enclaves. The notorious language in the directive, about ‘planned and well-thought-out combat operations [to] create an unbearable situation of total insecurity, with no hope of further survival or life for the inhabitants of Srebrenica or Zepa’, ‘crosses the line’ because civilians become a target of the military operation, the American intelligence officer said.

According to Butler, creating an ‘unbearable situation’ didn’t mean that at the time the VRS intended to conquer the enclaves militarily. The goal of the Bosnian Serbs was to create a situation that would convince the international community that the enclaves were not viable and to push them to evacuate the people out of Srebrenica and Zepa. The same motive was behind the restrictions to the influx of supply into the enclaves, for both the local population and UNPROFOR, Butler explained. This was done to force the UN to restrict its operations and make it more difficult for the blue helmets to assist the locals.

The VRS achieved this objective by the controlling convoys bringing in supplies to the enclaves, Butler said, not contesting the ‘legitimate concern’ of the Serb forces that the humanitarian aid convoys entering the enclaves could be used to smuggle in arms and ammunition. Making it impossible for the military observers to be relieved or disrupting the UN supply lines into the enclaves clearly showed that the VRS forces acted in accordance with the Directive 7. In other words, the intention behind the VRS actions was to render life in the enclaves impossible for both the population and the international forces.

Zdravko Tolimir had to have known about those objectives and actions the VRS took to implement them, Butler argued. Specific military tasks stemming from the Directive 7 were to a large extent meant for the intelligence and security departments in the Main Staff, headed by Tolimir. Tolimir’s task was to synchronize the activities of the sector in collecting detailed intelligence about the readiness of UNPROFOR to continue with its mission and to make sure that the real plans of the VRS remained secret and hidden.