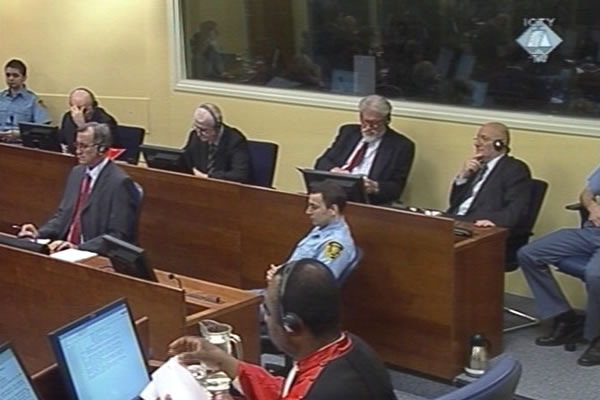 ‘Those who suffered deserve compassion and justice’, former president of the HVO Jadranko Prlic said in his final address to the judges. Like the other five Bosnian Croat leaders in the dock, Prlic denied any responsibility for the crimes committed in Herceg Bosna in 1993 and 1994. Reexamining his behavior in the war, Prlic concluded that he hadn’t done anything he would not do again in the same circumstances.

Addressing the judges in English, Prlic said that he ‘didn’t perpetrate or instigate any crimes’. He didn’t know if any other members of the HVO of the Croatian Community of Herceg Bosna – described by him as a ‘provisional executive body’ – were ‘involved in something like that’. ‘We did everything we could to alleviate the consequences of the war and destruction and took all the required measures to punish the perpetrators of those crimes’, Prlic said.

Addressing the judges, former president of the Herceg Bosna Department of Defense Stojic said, ‘I sincerely sympathize, from the bottom of my soul, with the victims of the war’, especially with the Muslim victims. As he heard the victims’ testimony in court Stojic ‘realized that there were crimes’. Those were the ‘most difficult moments of my life’, as Stojic said. Nevertheless, like Prlic, Stojic said that he ‘didn’t instigate or order’ those crimes.

‘Your honors, I never wanted for any crimes to happen, I never ever plotted or arranged any crimes’, said General Milivoj Petkovic, who was the only accused to apologize to the victims of HVO crimes. ‘I would like to take this opportunity to apologize to all the victims of the acts and omissions committed by any HVO personnel’, Petkovic noted, adding that this referred in particular to the Muslims with whom he ‘went to war, to fight side by side’ in 1992.

After his 30-minute closing argument last week, General Slobodan Praljak left it to his defense counsel Bozidar Kovacic to address the judges. Denying the accusations that Croatia and the HVO occupied parts of BH territory, Kovacic said that Praljak was not ‘the king’ in the occupied territory of Herceg Bosna, as the prosecution claimed. According to Kovacic, Praljak was ‘an officer who served on the front line to prevent mass expulsions of Croats’.

Dijana Tomasegovic Tomic, representing former chief of the HVO Military Police Administration Valentin Coric, said today that the military police was de iure and de facto subordinated to the military commanders in the performance of its tasks. Tomasegovic Tomic noted that Coric did not have any part in the decisions to detain or release prisoners from HVO camps and prisons.

Fahrudin Ibrasimovic, representing Berislav Pusic, former head of the Prisoner Exchange Office, told the judges today that in the five years of the trial he had not been given an answer to the question ‘who is Berislav Pusic and what is it that he did’. Ibrasimovic concluded that the answer to that question should be the acquittal of his client. Pusic didn’t attend the closing arguments for medical reasons.

After the final addresses by the defense lawyers and the accused, presiding judge Jean-Claude Antonetti concluded the longest trial ever before the Tribunal. The trial began on 26 April 2006. In the past five years, 208 witnesses were heard and about 10,000 documents were admitted as exhibits. This mountain of evidence will be considered by the judges who will then render their judgment. The prosecution has called for sentences from 25 to 40 years for the accused, while the defense asked for their acquittal. The judgment is expected in the spring of 2012.