WERE EXECUTIONS OF SREBRENICA CAPTIVES PLANNED OR NOT

In the cross-examination of Lazar Ristic, former deputy commander in the 4th Battalion, Zvornik Brigade, the accused Zdravko Tolimir tried to challenge the prosecution case that there was a parallel chain of command in the VRS units participating in the Srebrenica operation in the summer of 1995; it consisted of the security officers, from battalion level up to the VRS Main Staff 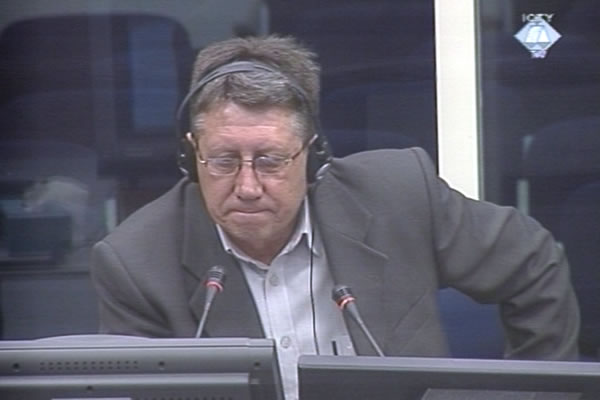 Prosecution witness Lazar Ristic served as the deputy commander in the 4th Battalion, Zvornik Brigade, in the summer of 1995. Before that, he was the security officer in the same unit. Today he agreed with Zdravko Tolimir that security officers in the VRS units, in line with the service manual, ‘did not have the right to issue orders’. As Ristic recounted, as a security officer in a battalion, he could merely ‘propose to the commander measures to be taken’, but not issue any order to anyone. The instructions to arrest deserters, for instance, did not have the force of orders, and were not binding for the military police.

Apart from trying to deny the existence of a parallel chain of command, in the security sector, Tolimir tried to prove in his cross-examination that the executions of Muslims captured after the fall of Srebrenica was not pre-planned. Ristic claimed he had reached the same conclusion after he discussed the execution in Orahovac with former Zvornik Brigade security officer, Drago Nikolic. As Ristic said, Nikolic told him on that occasion that on 14 July 1995 he was ‘taken aback and surprised’ by the decision to move the prisoners to the Zvornik area. Believing that the prisoners would be exchanged, he put them up in the school in Orahovac, because it was close to the demarcation line. The accused and the witness agreed that the decision to exchange the prisoners was ‘obviously altered at a later stage’.

When the accused tried to prove the Bosnian Serbs did not intend to execute the men captured after the fall of Srebrenica, the prosecutor addressed the issue in Ristic’s re-examination. He showed Ristic the statement of the facts signed in May 2003 by the former Zvornik Brigade chief of staff, Dragan Obrenovic, which is part of his plea agreement. In the statement, Obrenovic says that Nikolic told him on 13 July 1995 that the prisoners were brought to the Zvornik area. Nikolic said they were brought in ‘to be executed’.

Ristic confirmed he had read Obrenovic’s statement but maintained that ‘decision to exchange prisoners was altered subsequently’. If the intention had been to execute them, the witness contends, they would have been shot in Konjevic Polje, where they were either captured or surrendered. The prosecutor then put it to the witness it was impossible because there were still some people from the international organizations in the Konjevic Polje, and the captives could not be executed in their presence. Ristic said he had no knowledge of the events outside of the area of responsibility of the 4th Battalion; he was adamant that the prisoners were not to be brought to Orahovac.

The trial continues tomorrow with a new prosecution witness.