HARADINAJ WILL GO ON A WINTER HOLIDAY, BRAHIMAJ REMAINS IN DETENTION

Although the judges never denied that in Kosovo ‘there is an atmosphere of intimidation of witnesses’ and that the provisional release of the accused might result in more threats and intimidation, they decided to grant Ramush Haradinaj permission to spend the winter recess in Pristina. The enforcement of the decision will be stayed until the Appeals Chamber rules on any appeals filed by the prosecution. A similar motion filed by Lahi Brahimaj was rejected 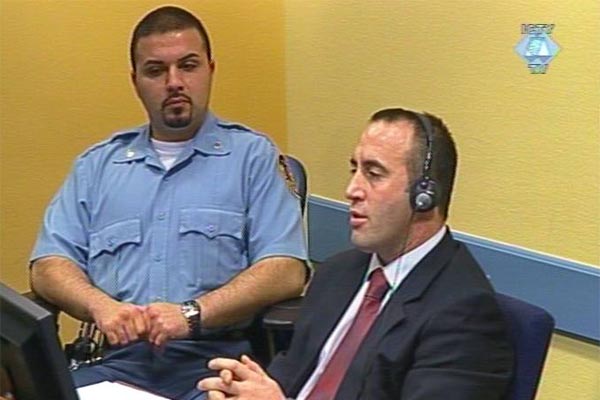 Ramush Haradinaj in the courtroom

The Trial Chamber with Judge Moloto presiding today decided to grant provisional release to the former KLA commander in the Dukadjin area Ramush Haradinaj from 17 December 2010 to 14 January 2011. The prosecution raised its objections in no uncertain terms, saying that to this day the prosecutors find it hard to convince the witnesses to come to The Hague to testify. However, the enforcement of the decision has been stayed until the Appeals Chamber rules on any appeals filed by the prosecution. Lahi Brahimaj, the judges decided, will spend the winter holidays in the Tribunal’s Detention Unit.

Similar conclusions were listed in the September 2010 decision, when Haradinaj’s request for provisional release pending trial was rejected. Why has Haradinaj now been granted a one-month provisional release? The judges explained that in their September decision they concluded that the media attention caused by provisional release of the accused ‘immediately after the appellate judgment and immediately before the start of the retrial’ might in fact have contribute to the atmosphere of witness intimidation. As the pre-trial stage went on a bit longer than expected, Haradinaj will not be provisionally released in the period just before the beginning of the trial’ or ‘immediately after the appellate judgment’.

If the prosecution doesn’t appeal and the Appeals Chamber doesn’t quash the decision, the accused president of the Alliance for the Future of Kosovo will arrive in Pristina just after the parliamentary elections and will be there during the post-election coalition-building process. In line with the Trial Chamber’s decision, Haradinaj is not allowed to participate in political life, to appear in public and in the media and must not leave the Pristina area. Haradinaj will spend time with his children and pregnant wife. This was Haradinaj’s key argument in his motion for provisional release. The judges took it into account but did not give it too much weight, as the decision states.

The Trial Chamber at the same time rejected an identical request filed by Haradinaj’s co-accused, Lahi Brahimaj. The judges explained that they ‘are not satisfied that the accused will not pose a danger to witnesses’. Brahimaj’s request was dismissed once before in September 2010, for the same reason.

In April 2008, the Trial Chamber acquitted Haradinaj and Balaj of all charges in the indictment and sentenced Brahimaj to six years in prison. In July 2010, the Appeals Chamber ordered a partial re-trial on the counts in the indictment related to the crimes against Serbs, Albanians and Roma in the KLA prison camp in Jablanica in 1998. The new trial is expected to begin in first few months of 2011.