Yesterday, the trial of Zdravko Tolimir proceeded in closed session. Today, the court heard testimony of former VRS officer Djoko Razdoljac, who has been subpoenaed to testify for the prosecution 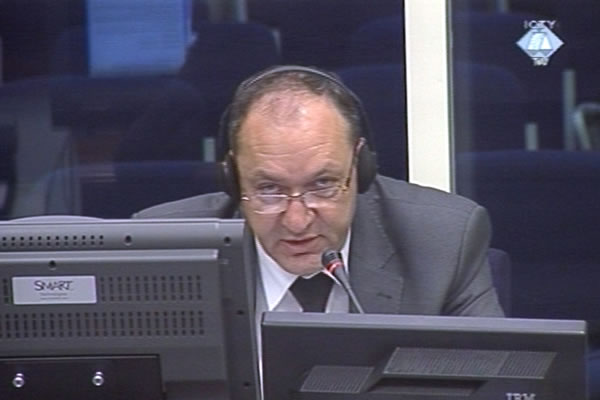 During the war, Djoko Razdoljac served as the assistant commander for logistics in the VRS Rogatica Brigade. In July 1995, he was in charge of logistics in the Zepa enclave, the other UN protected area that fell to the Bosnian Serbs that month. In his responses to the prosecutor, the witness confirmed that on 19 July 1995 he was there to greet General Mladic at the UNPROFOR checkpoint at Boksanica. General Mladic ordered him to attend ‘on behalf of the Rogatica Brigade’, the negotiations with the representatives of the people from Zepa, Hamdija Torlak and Benjamin Kulovac.

On a video taken at the meeting, the witness was able to identify generals Mladic and Tolimir and Colonel Dudnjik, who commanded the UNPROFOR Ukraine Battalion. Razdoljac’s task during the VRS operation in Zepa was to supply ‘food, clothes and ammunition’ to his brigade and other units involved in the operation. He was also tasked with getting 50-60 buses for the evacuation of the Muslim people from the enclave, and then to take care of the ‘war booty’ and to round up all the livestock that remained in the enclave after its fall.

The witness could not recall the date when the ‘evacuation’ of Zepa ended or the date when the Zepa mosque had been blown up. He did confirm that he saw the ‘lads who had come in to do the job’ by setting anti-tank mines which were then detonated to blow the mosque up. The presiding judge was prompted to warn the witness he could refuse to answer any questions that might incriminate him.

Razdoljac could not recall whether Hamdija Torlak, one of the negotiators from Boksanica, the Zepa priest Mehmed Hajric, war presidency member Amir Imamovic and defense commander Avdo Palic had been detained in the Rogatica prison after the fall of the enclave. He refused to change his evidence even after the prosecutor showed him a report from the security chief in the Rogatica Brigade where the men were listed as ‘prisoners of war’.

According to the prosecution, Colonel Palic was given special treatment. He was assigned a code name, Atlantis, which appears in confidential documents sent to the VRS Main Staff and General Tolimir. The witness claimed he had never heard of the name Atlantis before and that he knew nothing of the whole affair. Only Hamdija Torlak survived the detention in the Rogatica prison. The remains of Avdo Palic, Mehmed Hajric and Amir Imamovic were found near the village of Vragolovi near Rogatica.

In a short cross-examination, the accused general tried to prove that there had been no secret detainees from Zepa and that the VRS did not try to hide the number and treatment of the prisoners of war in the Rogatica prison. The witness confirmed the claims in the documents shown to him by Tolimir, indicating that the International Committee of the Red Cross had been given a list of prisoners of war and allowed access to the Rogatica prison.

General Tolimir’s trial continues tomorrow with the evidence of a new prosecution witness.