‘EVERYBODY KNEW ABOUT THE EXECUTIONS IN SREBRENICA’

In his evidence at the trial of Zdravko Tolimir, former treasurer in the VRS Zvornik Brigade said that the Muslims captured after the fall of Srebrenica were executed ‘in public’: ‘everybody knew’ about them 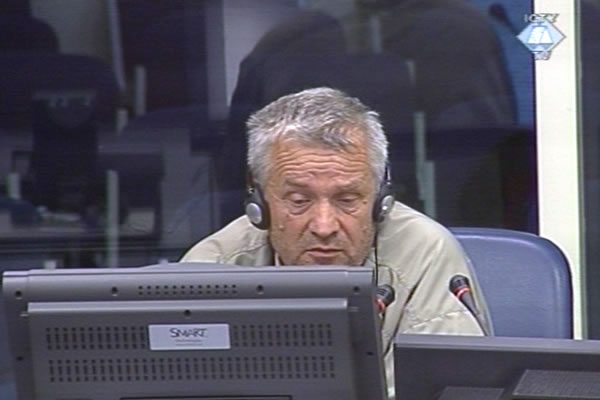 Tanacko Tanic, former treasurer in the VRS Zvornik Brigade, appeared for the third time as a witness before the Tribunal, this time at the trial of Zdravko Tolimir. The presiding judge warned the witness, who is still a suspect, that he may refuse to answer any questions that might incriminate him. If the judges ordered the witness to respond, his answers could not be used against him in court.

A summary of Tanic’s statement was read out in court today. After the fall of Srebrenica on 14 July 1995, Tanic saw when the Muslims were brought to a school in Orahovac near Zvornik, detained there and then taken to execution sites.

Tanic was there on the orders of his superiors in the logistics company of the Zvornik Brigade. In the schoolyard, Tanic saw two dead bodies and prisoners being put on the trucks. He also saw a pile of bags and personal possessions that was left behind. Tanic claims it was clear to him that those people were not going to be exchanged as they had been told. The indictment alleges that approximately 1,000 Muslims were executed at a site near Orahovac on 14 July 1995. There were children among them. The witness confirmed that a Muslim boy was sat with the driver and two VRS officers in the truck that took Tanic to the barracks that same evening.

The prosecutor asked Tanic why he didn’t inform the Zvornik Brigade commander and other high-ranking officers about what he had seen in Orahovac. Tanic’s answer was that it was not his duty to do so. Tanic saw security chief Drago Nikolic and his deputy Milorad Trbic near the school and he thought they could see for themselves what was going on. Besides, ‘all the executions were carried out in broad daylight and in public and everybody knew about them’, the witness insisted. The people from Serbia could watch the executions in Kozluk, near the Drina river, Tanic said; that day, the executions went on ‘from noon to midnight and everybody knew about them’, he added.

In the cross-examination, General Tolimir put it to the witness that he gave his first statement to the OTP investigators in June 2002 ‘under pressure’. The witness was told that he was being interviewed as a suspect because ‘he was at a crime scene with a rifle’. Tanic denied this, claiming there was no pressure, but he did say he regretted today having given all his statements without a lawyer.

The trial of Mladic’s assistant for security in the VRS Main Staff continues tomorrow.