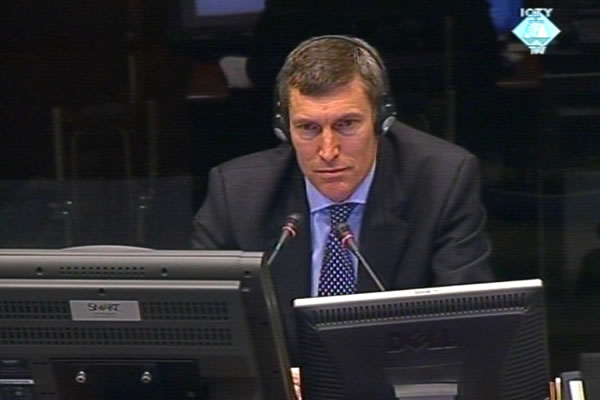 Civilians detained in prison camps under the Bosnian Serb control were ‘just pawns in the dirty games played by nationalist politicians’, says the report of the European Community Monitoring Mission drafted in September 1992. Charles George Alexander McLeod, who served in the mission and is a British Army captain, testified today at the trial of Bosnian Serb police officials Mico Stanisic and Stojan Zupljanin. McLeod talked about his visits to northwestern parts of BH that preceded the report.

The report goes on to say ‘it is impossible to avoid the conclusion that most of the prisoners are innocent people caught as hostages to promote ethnic cleansing’. The monitors ‘were not impressed’ by the claims made by Serb authorities that those civilians were detained for their own safety. Today the witness said it was clear that expelling people from their homes and detaining them in prison camps was ‘a procedure applied to get rid of those people’.

The Monitoring Mission believes that the leaders have ‘effective control’, the report continues. There were some out-of-control fringe elements, although some leaders liked to use the existence of such groups as an ‘excuse for atrocities’. The witness explained that the conclusion was made after the monitors saw organized prison camps with more than 5,000 detainees, guarded by soldiers and police. All of this indicated there was ‘a structure’ in place, the European monitors concluded.

When he visited the camps, Captain McLeod could see for himself the conditions in which the prisoners were kept and to talk to them but, as he said, most of them ‘were reluctant to speak openly’ about the conditions in the prison camp and how they got visible injuries. “Most of the of prisoners live in fear, scared for their lives, walking like humiliated and degraded men, and this is apparent in Manjaca. Previous mistreatment by authorities has undoubtedly broken the spirits of many prisoners. Mental scars are likely to persist for a long time to come. The health conditions were unacceptable, and the injured and the sick in Manjaca lay on the stable floor with only one blanket”, the observers wrote in their report.

As the witness said, they saw children younger than 17 and people older than 83 in prison camps. This prompted Stojan Zupljanin’s defense counsel to put it to the witness that ‘the age or sex are not a barrier to taking part in a war’. The British captain agreed with the argument, but he noted that he hadn’t seen any children or women carrying arms among any of the sides in BH.

The defense counsel noted that the witness based his conclusion that the prisoners were mostly civilians only on what he had heard from them. It is ‘to be expected’ that those who fought in civilian clothes would deny they had fought in prison camps in order to be released as soon as possible, the defense counsel argued. The witness agreed this was possible, but insisted it was his impression that they were not fighters but civilians.