METHOD TO THE LOOTING

Former official of the Democratic Action Party from Prijedor says that after Kozarac was shelled it was looted, and there was a method to the looting: the looters would first load kitchen appliances on the trucks, electronic goods went next, and finally the woodwork. Everything was stored in a single storage site 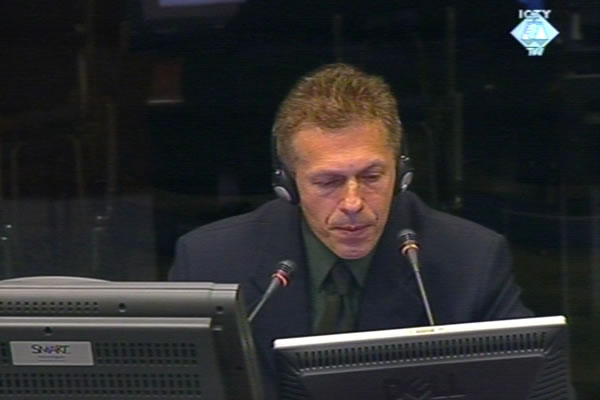 Former vice-president of the Democratic Action Party in Prijedor Mevludin Sejmenovic continues his evidence about the attacks of the Serb troops on the Muslims in Prijedor in 1992. Mico Stanisic and Stojan Zupljanin, who were leading figures in the Bosnian Serb police, are charged with those crimes.

Sejmenovic today described the attack on Kozarac near Prijedor, on 24 May 1992. In the ‘total chaos’ caused by the shelling that went on for two days in Kozarac, many women, children and elderly were killed as they were not allowed to leave the village before the attack.

After the shelling, the Serb troops entered the village ‘burning down houses and killing the old people who could not move’. Serb houses were marked with a letter S or an inscription saying ‘this is Serb property’ or by Serb flags and the attackers spared them. The looted goods were then removed from the non-Serb houses in trucks and stored in one place. There was ‘a method’ to the looting, as the witness recounted: the first items to be taken were household appliances, then electronic goods such as TV sets and then the woodwork, the witness explained. After organized looting was finished, the ‘ordinary thieves’ came in carts to take what was left.

The prosecution contends that the Serb army, police and paramilitaries killed at least 800 Muslim civilians in the shelling and cleansing of Kozarac.

With the help of an acquaintance, the witness was able to hide for some days near Kozarac, and was able to observe the Serb forces in ‘green and blue uniforms’ arrest and round up non-Serbs from the nearby villages, take them away, beat them and force them to sing Serb songs.

The official reason for the attack on Kozarac was the refusal of the Muslim population to bow down to the Serb ultimatum and surrender the arms. The witness recounted that police inspector Radakovic – who interviewed the witness in the Omarska camp – told him he was not interested in the arms at all because he knew that the people in Kozarac had only ‘light weapons’; he was interested in ‘Sarajevo and the politics’.

The witness spent about 10 days in the Omarska prison camp in mid-August 1992. Vojislav Kupresanin, president of the Assembly of the so-called Autonomous Region Krajina, took the witness out of the prison camp. Sejmenovic learned from Kupresanin that the president of Republika Srpska, Radovan Karadzic, had issued an order to locate all surviving local officials; they were to be given clothes and food to ‘gain weight’ and were then to take part in a series of round tables ‘with political goals’ and call on the non-Serb population to resume ‘normal life’. Karadzic’s idea about the round tables never came to life.