In 1992, Bosniaks in Banja Luka lived in a ‘ghetto, and felt like second-rate beings’ while uniformed Serbs ‘fired like crazy’ at houses and mosques. Police officers beat up non-Serbs in the infamous ‘red van’, the witness recounted. In order to be allowed to leave the town, the witness had to sign the ‘emigration paper’ 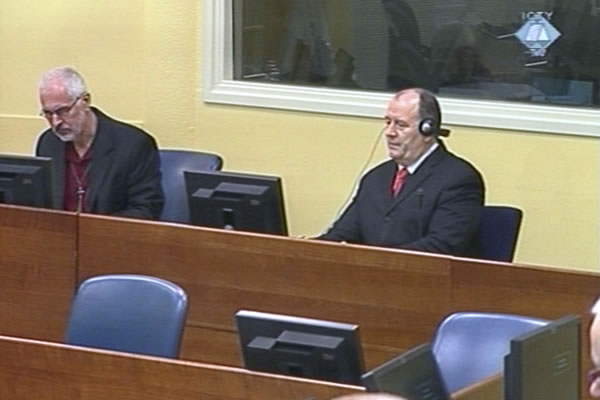 At the trial of Bosnian Serb police officials Mico Stanisic and Stojan Zupljanin, a Bosniak from Banja Luka testified today under the pseudonym ST-223. The prosecution called this witness to testify on adjudicated facts about the intimidation of non-Serbs and difficult living conditions in the town. The defense contests these facts.

In April 2002 the witness testified at the trial of Radoslav Brdjanin. He spoke in detail about the ‘red van’ that ‘instilled fear and terror’ in the non-Serbs in Banja Luka from the spring of 1992. The local police used the vehicle to beat up Muslims and Croats; they would always leave the doors open when they did it to intimidate the others. The witness had a close encounter with the red van in the winter of 1992.

People could not move around Banja Luka without permits, but sometimes, even permits did not guarantee safe passage through many check points manned by the Serb troops, the witness said. ‘We felt like we were in a ghetto, like a second-rate beings’, the witness described the ‘psychologically negative’ situation the non-Serbs in Banja Luka faced. Armed Serbs ‘fired like crazy’ at houses and mosques. They fired so many rounds that casings ‘piled up’ in the streets.

Bosniaks presented their problems to the Serb authorities at a meeting in August 1992; the witness and the accused Zupljanin attended the meeting. Despite the avowals that the problems would be solved, the witness felt the meeting was counterproductive because the very next day, the police launched mass raids and arrests. In the part of the town where the witness lived, the police patrolled constantly. Instead of protecting the people, the patrol officers often extorted money from the people or looted their property.

If they wanted to leave the town, they had to sign a document known as the ‘emigration paper’, confirming that they agreed to leave all their movable and immovable property to Republika Srpska.

Only Zupljanin’s defense lawyer cross-examined the witness because Stanisic’s defense didn’t have any questions. Zupljanin’s defense lawyer put it to the witness that by signing the ‘emigration paper’ the Bosniaks didn’t transfer their property rights. Instead, they only allowed their property to be used temporarily. Witness ST-223 explained that the term ‘temporarily’ wasn’t in the document. Although he ‘secretly hoped’ so, the witness didn’t believe he would ever be able to return and reclaim his property.

The defense tried to discredit the witness, noting that he was tried in absence and sentenced to 12 years for being a member of the Valter group, purportedly set up by the SDA. According to the judgment, the witness sent ‘military and general information about the situation’ to the BH embassy and foreign embassies in Zagreb. The witness denied he had any ties with the organization, saying the defense’s allegations were ‘bare-faced lies’. The witness reminded lawyer Dragan Krgovic that he did not have freedom of movement, let alone the possibility to gather and send information. Nobody has ever held him responsible or tried to enforce the sentence upon his return to Banja Luka.