The defense of the first Bosnian Serb interior minister alleges that the Territorial Defense in Zvornik controlled the police reservists guarding most of the detention facilities. The prosecution contends that police reservists were also part of the MUP headed by the accused Stanisic 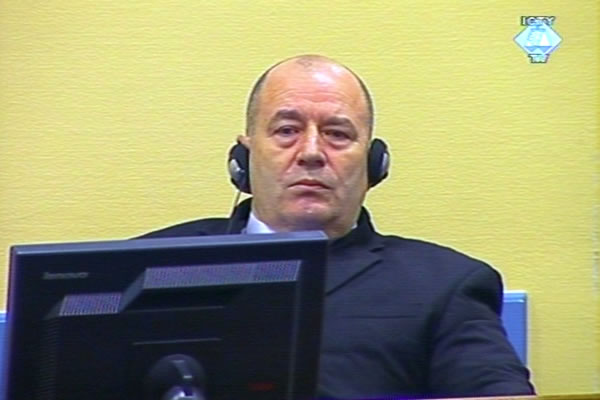 A protected witness testifying under the pseudonym ST-222 completed his evidence at the trial of former Bosnian Serb police officials Mico Stanisic and Stojan Zupljanin. Over the past two days, the witness told the court what he knew about the crimes against non-Serbs in Zvornik in 1992.

The witness claimed he did not learn about the massacre of 88 Muslims in Drinjaca before 1993 – the massacre happened on 30 May 1992. He heard that Pivarski’s paramilitaries were responsible for the massacre, but he ‘didn’t know’ if the Zvornik police ever investigated the case. According to the prosecution’s pre-trial brief, about 150 Muslims from the village of Kostijerevo were detained in a school in Drinjaca. Women and children were soon released, but 91 men remained in custody. They were first abused and then taken out ten by ten to be executed. A total of 88 men were killed then.

In the examination-in-chief, the witness said that the police chief Milos Pantelic invited paramilitaries from a group called ‘Gogic’s men’ to Zvornik; they wore police uniforms. In the cross-examination today, the defense lawyer noted that Pantelic was appointed by the provisional government and not the interior ministry headed by the accused at time.

The examination-in-chief of witness ST-222 proceeded mostly in closed session and it remained unclear how he had learned about the crimes in Zvornik. Today, however, Mico Stanisic’s defense lawyer Slobodan Zecevic said in open session that in 1992 the witness worked in the Zvornik police. The witness confirmed this.

The defense counsel put it to the witness that the police chief Marinko Vasilic ordered the transfer of prisoners held in the Culture Center in Celopek to the magistrate court prison in order to ‘protect’ them. Vasilic had heard that the paramilitaries known as the Yellow Wasps ‘were abusing and killing them’. In order to get corroboration for the defense argument that the Territorial Defense controlled the police reservists, the defense lawyer asked the witness to explain why active-duty policemen – and not police reservists – were ordered to transfer prisoners from Celopek. It was only a matter of experience, the former policeman replied, because ‘we active police officers had more experience’ and could stand up to the Territorial Defense and the people who were against the attempt to ‘rescue’ the Muslim detainees.