Continuing the cross-examination of former UN Dutch Battalion soldier Colonel Egbers, the accused general Zdravko Tolimir put it to the witness that in July 1995, the VRS detained Dutch peace-keepers for their own security 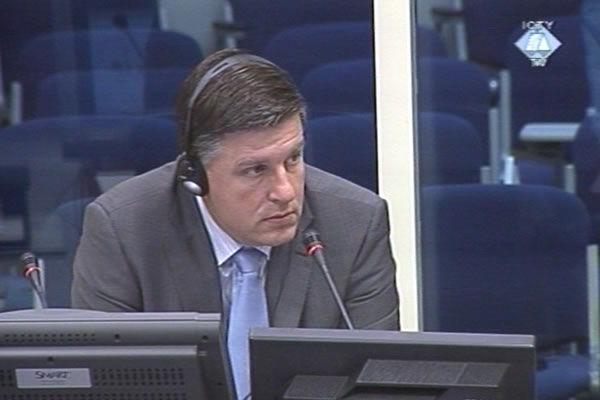 Dutch officer Vincentius Bernardus Egbers began his evidence at the trial of Zdravko Tolimir last Monday. Today, Egbers returned to the courtroom to allow the former general charged with genocide and other crimes in Srebrenica and Zepa in 1995 to continue his cross-examination.

In July 1995, Egbers, who was a lieutenant at the time, commanded a platoon in Bravo Company in the UN Dutch Battalion in Srebrenica. From 8 to 14 July 1995, Egbers witnessed the events described in the indictment against general Tolimir.

On 8 July 1995, the Serb forces opened artillery fire on the observation post manned by Egbers’s platoon, Egbers recounted. Then, on 9 and 10 July 1995, before the Serb troops entered the enclave, the Dutch officer escorted the people from Srebrenica to Potocari. On 13 July 1995, as he was escorting a refugee convoy, Mladic’s troops stopped Egbers in Konjevic Polje and detained him in a local school. Egbers was held there until the next day.

Continuing the cross-examination, the accused general suggested that the Dutch officer had been ‘detained for his own security’. Egbert rejected this claim, noting there were no obstacles that day en route to Potocari – except for the Bosnian Serb forces. Tolimir nevertheless insisted that the BH Army attacks in that area were so fierce that the VRS was compelled to protect the UNPROFOR soldiers, and ‘put them up’ in the school in Konjevic Polje. The Dutch officer remarked ironically that the accused was trying to convince him that he ‘should be grateful to the Bosnian Serb army for protecting me’.

Tolimir also put it to the witness that the Dutch Battalion commander, Colonel Karemans, met with General Mladic on 11 and 12 July 1995 and demanded that the people of Srebrenica be evacuated from that area. Egbers rejected this suggestion, prompting Tolimir to refer to the claims of several witnesses about ‘the people’s explicit wish to leave the enclave’.

‘Those people had no choice’, Egbers replied. ‘Their circumstances, without any food and water, on a hot summer day, without any chance of returning home, forced them to do that. Certainly they did say yes when they were asked if they wanted to leave, but they were forced into that situation’, the Dutch officer concluded.

The trial of Mladic’s assistant for security and intelligence continues tomorrow.