At the trial of Zdravko Tolimir, OTP investigator continues her evidence on the compilation of video recordings from Srebrenica, put together to make a reconstruction of sorts of the events following the arrival of Mladic’s troops in the enclave nominally protected by the UN in July 1995 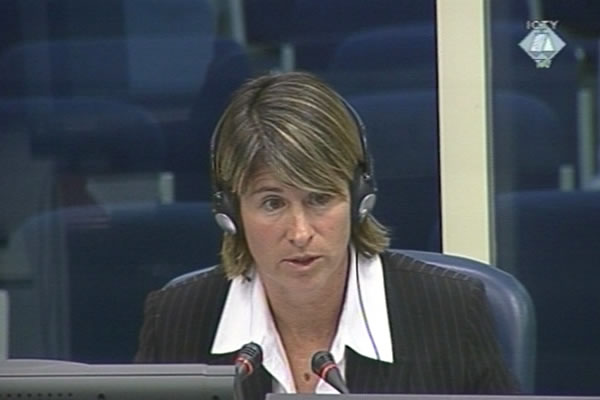 At the trial of Mladic’s former assistant for security in the VRS Main Staff Zdravko Tolimir, the prosecution continued showing a compilation of video recordings entitled Srebrenica - Court Video. The footage is a reconstruction of sorts of the events in July 1995 when the crimes the accused general is charged with were committed.

OTP investigator Erin Gallagher was called to testify about the sources of the footage, the way the OTP obtained it and how the compilation was actually put together. Gallagher has been working on the Srebrenica investigation since 2006. Gallagher today continued her evidence, begun a month ago, by describing the footage obtained from the BBC, Reuters and WTN news agencies, from the Serb Radio and Television (today the Republika Srpska Radio and Television) and from Belgrade journalist Zoran Petrovic Pirocanac. The videos show the events is Srebrenica, Potocari and nearby locations on 11, 12 and 13 July 1995.

Today, the court saw video footage showing the gathering of the refugees in Potocari near the UN Dutch Battalion base on 11 July 1995, the arrival of the VRS led by Ratko Mladic in Srebrenica on the same day, the separation of men from women in Potocari, women and children being put on buses in Potocari on 12 July and the attack of the Bosnian Serb army and police on a column of men trying to break through to Tuzla through the woods and mountains.

At the end of her evidence today, the prosecution showed the footage shot by Zoran Petrovic in Potocari, Kravica and Sandici on 13 July 1995. The witness confirmed that the film had been ‘sold to many television networks and TV agencies’. However, as she went on to say, frames edited out from the original recording broadcast in 1995 by a Belgrade TV network, Studio B, were found five years ago.

The frames that were edited out had been recorded in Potocari; they show prisoners on a balcony of a white house. The prosecution alleges that the prisoners were detained there after they were separated from their families. The original footage from the Kravica farm warehouse did not show the bodies of dozens of Muslims piled in front of the warehouse; the indictment alleges that about a thousand prisoners were killed in front of the warehouse. Finally, the footage showing a field near Sandici, also found at a later date, shows the men from the column heading towards Tuzla surrendering to the Bosnian Serb soldiers, and the VRS artillery raining shells on the hills where the column from Srebrenica was trying to get through to the BH Army- controlled territory.

Investigator Gallagher will continue her evidence at a later date.