The witness Ivo Atlija says that he had to sign a statement in the Prijedor police station ‘relinquishing all his moveable and immovable property’. Although the statement he signed claims the witness was doing it ‘voluntarily’, now Atlija says he did it because he knew that otherwise he ‘would not be allowed to get out of that hell’ 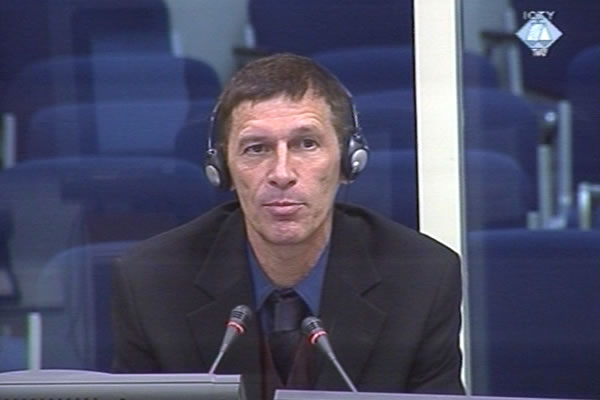 Ivo Atlija, a Croat from Prijedor, testified today at the trial of Mico Stanisic and Stojan Zupljanin about the attacks of the Serb forces on the villages in the Prijedor municipality. The former Bosnian Serb police leaders are charged with those crimes.

On 30 April 1992, on his way to the Ljubija mine where he worked, Atlija saw a number of check points manned by Serb soldiers and paramilitaries. On his arrival in the mine, manager Ekrem Crnkic told them that the SDS had taken over the power in the town last night with the assistance of the Serb forces. Crnkic told everybody to go home as the companies were closed for business.

The witness’s Croat and Muslim friends who worked in the court, police and municipality told him that the Serb forces had prevented them from getting to work. As the witness said, he realized that the reason why a large number of Serb troops suddenly appeared in the town was to prevent the non-Serbs from coming to work and to allow Serbs to take over all the posts.

The witness then went to the Croatian village of Brisevo where his parents lived. Atlija remained there until leaving BH in November 1992. During Atlija’s stay in Brisevo, the village was shelled twice – in late May and in July 1992. After the first attack, the Serb commander told them that it was just a ‘warning to show them what would happen if they were not loyal’.

From a hill in the village of Brisevo, the witness could observe the shelling of the villages of Hambarine and Kozarac. The villagers who had fled the villages told Atlija that men had either been killed or taken to prison camps, while women had been raped. Houses were looted and set on fire. The prosecution alleges that the attacks on Kozarac and Hambarine prove that the military and police forces launched coordinated attacks. At least 800 Muslim civilians were killed and most of the men captured in the attacks were detained in the Omarska and Keraterm prison camps, the prosecution alleges.

The witness contends that from May to November, non-Serbs couldn’t move freely. A special permit was needed to go to Prijedor. To get a permission to leave Prijedor in September 1992, the witness had to go to the police station and sign a statement ‘relinquishing voluntarily all his moveable and immovable property’. Atlija did as he was told because he knew that otherwise he ‘will not get the permission to get out of that hell’.

In a five-minute cross-examination, Stojan Zupljanin’s defense counsel noted that Atlija didn’t see the police taking part in the attacks on the villages. The witness agreed, adding that it was too far away to be able to see the uniforms. He could see only the houses in flames. The defense counsel then noted that the witness did not inventory all his possessions in the statement relinquishing his property, but did so in general terms, relinquishing all he possessed. The witness confirmed it.

The trial for the crimes of the Serb police against Bosnian Croats and Muslims in 1992 continued with the evidence of the next prosecution witness. The trial proceeded entirely in closed session.