TOLIMIR: ‘SELF-EVACUATION’ OF MUSLIMS FROM SREBRENICA

General Zdravko Tolimir continues his cross-examination of Kenyan major Kingori, in an effort to support his version of events in Srebrenica in the summer of 1995: according to him, Muslims from Srebrenica ‘requested on their own’ to leave the enclave and the ‘UN forces helped them’ 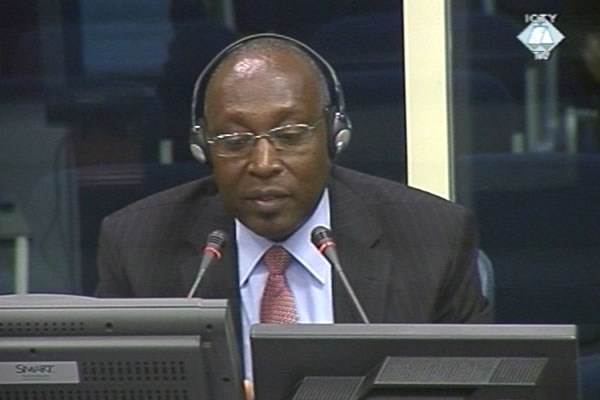 Josef Kingori, witness at the Zdravko Tolimir trial
The accused general Zdravko Tolimir continues his cross-examination of former UN military observer Josef Kingori. Bringing up a letter the mayor of Srebrenica sent to President Alija Izetbegovic on 9 July 1995, Tolimir argued that the military and political leadership of the enclave had a detailed plan to leave Srebrenica even before Mladic’s troops launched the attack. There was another plan to separate the population into two groups which were to withdraw along different routes, Tolimir claimed.

According to Kingori, even if the evacuation from Srebrenica had been planned, it couldn’t have been the result of a voluntary decision by the people. Their departure was a necessity, caused by the incessant shelling from the VRS positions. On 11 July, the VRS forces finally entered the town. Kingori also rejected Tolimir’s suggestion that the VRS shelled only military targets. ‘I don’t know of any facilities used by the BH Army except for the communications center in two small rooms located in the post office building’, Kingori said.

Tolimir also tried to contest the witness’s evidence about the threats the VRS officers issued to the Muslim population of Srebrenica through UNPROFOR personnel and UN military observers. Kingori testified that ‘Major Nikolic and Colonel Vukovic’ in their contacts before the attack on Srebrenica repeatedly told him to tell the Muslims that it ‘is best for them to pack and move out or else they will be killed’ because Serbs ‘don’t want to live with the Muslim fundamentalists’.

The accused general suggested that Kingori misinterpreted, because of ‘language barrier’, what the two VRS liaison officers with the UN had said. At the meetings in the Fontana Hotel, General Mladic offered the people of the enclave free choice: to leave or to stay if they laid down their arms.

‘We had no reason not to believe the liaison officers’, responded Kingori. They certainly received their instructions from their superior officers, all the way up to Mladic, since this was their job – to liaise with the UN troops. Also ‘what they told us always came true, including those threats’, the Kenyan colonel stressed. We had no reason to doubt them, Kingori said. Josef Kingori will complete his evidence on Monday.