CAUSE OF DEATH OF SREBRENICA VICTIMS

In his evidence at the trial of VRS general Zdravko Tolimir, British pathologist John Clark noted that the victims in Srebrenica were mostly men who died of gunshot wounds to the back. Clark worked on the postmortems of Srebrenica victims 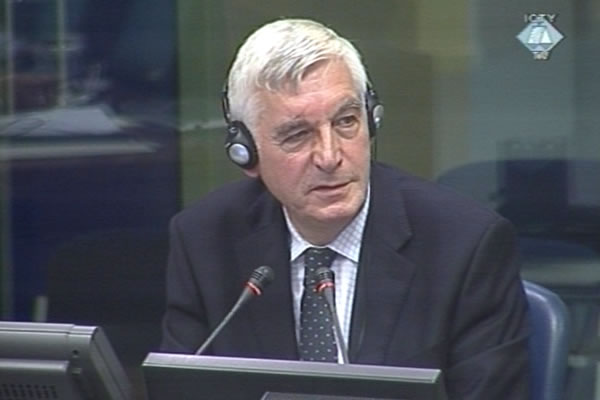 John Clark, witness at the Zdravko Tolimir trial
The trial of Zdravko Tolimir, former Mladic’s assistant for security in the VRS Main Staff continued with the evidence of British pathologist John Clark. From 1999 to 2001, Clark headed a team of pathologists examining the remains of Srebrenica victims exhumed from mass graves in Kozluk, Konjevic Polje, Glogova, Lazete, Zeleni Jadar and the bodies found in the Ravnica area. Tolimir is charged with genocide and other crimes in Srebrenica in the summer of 1995.

Clark already testified at the trials of General Radislav Krstic and of the seven Bosnian Serb military and police officers charged with Srebrenica crimes. Transcripts of Clark’s previous evidence were admitted into evidence and the prosecutor read a brief summary. Dr. Clark’s task was to examine the bodies of exhumed victims, determine the number and type of injuries and establish cause of death, the prosecutor said. Dr. Clark also supervised members of his team working on the exhumations and postmortems of the victims from mass graves.

In the cross-examination, Tolimir put it to the witness that the victims whose bodies were exhumed from mass graves in Srebrenica had in fact been killed in the fighting. They wore civilian clothes because they were in a demilitarized zone; they did not put on their uniforms because they didn’t want ‘UNPROFOR to prevent them from taking part in military activities’, Tolimir argued. Clark said that his task was not to determine if the victims had died in combat but to determine the type of injuries and cause of death. Clark repeated that the exhumed victims were not in uniform and there were no arms or ammunition near them. Many of them were too young or too old for military service and some were physically disabled, unable to use weapons, Clark said. He did say he was willing to agree that soldiers wearing civilian clothes might have been among the victims but he had no solid evidence of that.

Tolimir referred to the evidence of some witnesses who described what had happened to the column moving towards Tuzla through the woods, encountering ambushes of the Serb troops. Tolimir claimed that some of the victims had committed suicide in despair. The witness agreed this was possible, but noted he could not remember finding any injuries typical of suicide – such as ‘gunshot wounds to the mouth, head or chest’ – among the 86 percent of the victims who had died ‘of gunshot wounds’.

The cross-examination of the witness continues tomorrow.