EVACUATION OF ZEPA OR DEATH SENTENCE

Former president of the Zepa executive board and a member of its war presidency recounts how at the negotiations General Ratko Mladic demanded that the entire population be evacuated from the enclave, threatening the Bosniak representatives that they ‘will sign their death warrant’ if they declined 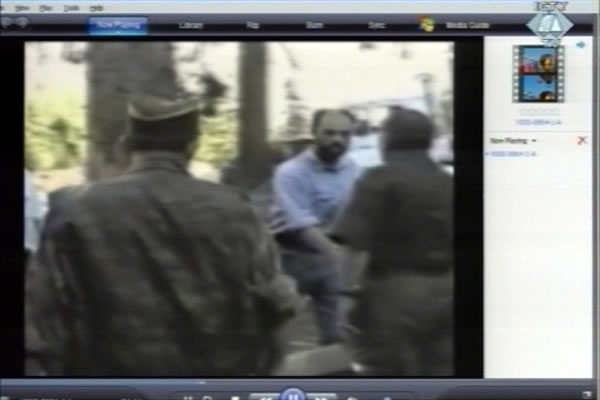 Images from the video filmed during negotiation of the Žepa delegation with Ratko Mladić on the 19. 07. 1995.
After a brief evidence of yet another employee of the BH Army surveillance service who testified under the pseudonym PW-076, the notes and transcripts of six intercepted conversations were admitted into evidence. Their contents were not disclosed. The trial continued with the evidence of former president of the executive board in the Zepa municipality and member of its war presidency. The witness began his evidence yesterday with protective measures but without a pseudonym.

When the witness continued his evidence today, the footage of the negotiations talks between the Zepa delegation and Ratko Mladic on 19 July 1995 was shown in court, revealing the identity of the witness. The witness had said that he and Dr. Benjamin Kulovac took part in the negotiations. The person seen in the footage sitting by the doctor introduced himself as Hamdija Torlak and General Mladic addressed him as such.

Yesterday, the witness described the first round of talks on 13 July 1995; General Zdravko Tolimir demanded that the entire population of Zepa be evacuated. The Zepa war presidency rejected the demand in fear that men of military age would meet the same fate as the men in the Srebrenica enclave, the witness explained.

As the witness recounted, the next day, on 14 July 1995, the Serb forces launched a heavy artillery attack on Zepa. The shelling lasted until 19 July 1995. There was a lull, followed by an invitation to another round of talks – this time with General Ratko Mladic.

The prosecutor today showed a video of the talks between General Mladic and the Zepa defense commander, Avdo Palic. They talked on 19 July, using the radio equipment of the UN Ukraine Battalion. Mladic is trying to talk Palic to attend the talks at a checkpoint manned by the Ukrainians, telling him it was their ‘last chance’ and that refusal to do so would be tantamount to ‘signing your death warrant’.

Doctor Kulovac and Torlak arrived at the Ukrainian check-point on Boksanica instead of Palic. General Mladic told them the entire population should leave the enclave, adding that he would provide the trucks and buses, which would be escorted by the UN vehicles. The witness noted today that parts in which Mladic gave his terms to the BH Army were edited out of the footage of the negotiations filmed by the VRS cameramen. Mladic told the BH Army they had to surrender their weapons and be registered by the Red Cross. After that the BH Army personnel would be exchanged, he said.

When the Zepa War presidency insisted that the men of military age be exchanged on the ‘all for all’ basis, the Serb side took it as their refusal of Mladic’s terms. As a result, the attacks on Zepa resumed on 20 July 1995 with increased ferocity.

The VRS troops came closer to the center of Zepa. On 24 July 1995, when the VRS conquered the ‘key elevation’ for the defense of the enclave – Brezova Ravan – the Serb troops stopped. Mladic called for another round of talks, and this time, the witness went alone. Mladic was very angry, the witness recounted, asking him to sign immediately a paper that was a ‘sort of agreement on the disarmament’. One of the items referred to the evacuation of the population.

He decided to sign that paper as he had no choice, the witness explained. ‘We were forced to do it. I would have signed any paper that meant the people would have to be evacuated, because the inner core of the war presidency had decided to do it,’ the witness said today. He will continue his evidence tomorrow.