SESELJ WANTED TO ‘GET ARKAN OFF HIS BACK’

In his cross-examination of Nenad Jovic, called by the Trial Chamber, the prosecution tried to prove that the witness spoke the truth in his statements to the OTP investigators when he blamed ‘Seselj’s men’ for various crimes. The accused Seselj said he believed the witness’s claim that he had given the statements under duress, denying any ties between his volunteers and Arkan’s men. Will there be a defense case at all? 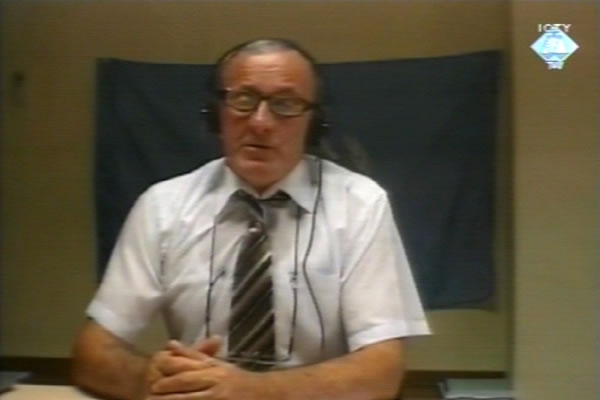 Nenad Jović, witness at the Vojislav Seselj trial
In the cross-examination of Nenad Jovic, former volunteer of the Serbian Chetnik Movement, prosecutor Marcussen tried to shed more light on the events that led to the witness defection to Vojislav Seselj’s side in late 2007. The witness had previously given several statements to the OTP investigators and had agreed to testify in court as a prosecution witness. In his statements, Jovic argued that Seselj’s men committed crimes in Baranja and in Zvornik in 1991 and 1992. Yesterday, in his response to the judges’ questions the witness denied most of his previous claims.

The witness contended he had signed his statements because his family’s security had been threatened. This prompted the prosecutor to ask the witness who threatened him and when. According to Jovic, it was a prosecutor named Rita who suggested that he should ‘think of his children’, and he saw it as a threat. The prosecutor reminded the witness that he had complained to Rita on two occasions before 2007 that he didn’t feel safe because of the threats he had been receiving from persons close to the Serbian Radicals. Jovic in fact asked for protection. Today Jovic explained he did it ‘only to see if the prosecution could help him’, but concluded it could not.

At the beginning of his cross-examination, Vojislav Seselj stressed he believed the witness’s story that he had signed his statements to the OTP investigators under duress. Seselj nevertheless asked the witness to recant again most of his earlier claims. The accused said his aim was to get the Tigers’ commander Zeljko Raznatovic Arkan ‘off his back’. The accused, in other words, wanted to prove that the two of them couldn’t have been part of the same joint criminal enterprise, as alleged in the indictment.

Seselj put it to the witness that ‘Arkan’s men’ didn’t take part in the attack on Zvornik in April 1992 together with the joint Serb forces, which included Seselj’s men. Seselj claimed that Arkan’s men entered the town once it was captured, looting property and killing civilians there. Jovic agreed with Seselj’s suggestions without demur, despite the fact that in his previous statements to the OTP investigators he said that Arkan had led the troops attacking Zvornik. The troops included Seselj’s men, Jovic contended at the time. When he was cross-examined by the prosecution, the witness said that ‘men with Chetnik insignia’ didn’t have a leader and ‘attached themselves to Arkan because they saw there was somebody in command there’.

When Jovic completed his evidence, there was a brief but important discussion of administrative issues, primarily on the continuation of the trial of the Serbian Radical Party leader. The Trial Chamber has now called all the witnesses on its list and a 98 bis hearing may follow after the summer break. Rule 98 bis allows the accused to file a motion for his acquittal if, in his opinion, the prosecution has failed to call evidence which, if accepted, would lead to his conviction.

This remains to be seen, as Seselj has indicated that he may not file a Rule 98 bis motion, and may indeed decide not to present his case altogether because the Registry has refused to finance Seselj’s defense under the rules Seselj has imposed. In that case, the parties would be invited to deliver their closing statements. At the same time, the prosecution indicated it was unable to rest its case. The prosecutor today said that he had submitted a motion, seeking leave to call two new witnesses, saying merely that they were investigators.

As the hearing drew to the end, the accused commented on the reports in the Serbian media about his role in the assassination of Prime Minister Zoran Djindjic and the contracts to kill his former party colleague Tomislav Nikolic and Belgrade journalist Dejan Anastasijevic. Seselj called those ‘infamous lies’ that could result in the restriction to his wife’s visits. If that happens, Seselj will stop taking his heart medication. The presiding judge told Seselj he ‘should not resort to blackmail’, but use legal means to prevent the restrictions. Judge Antonetti has asked the Serbian Commission for Cooperation with the Tribunal to forward the results of an enquiry into Seselj’s possible involvement in those crimes; he has done it ‘on his own behalf’ because the other members of the Trial Chamber, judges Lattanzi and Harhoff, refused to join the presiding judge in his request considering it to be irrelevant for the case against the former leader of the Serbian Radical Party. Seselj is charged with crimes against humanity in Croatia, Vojovodina and BH.